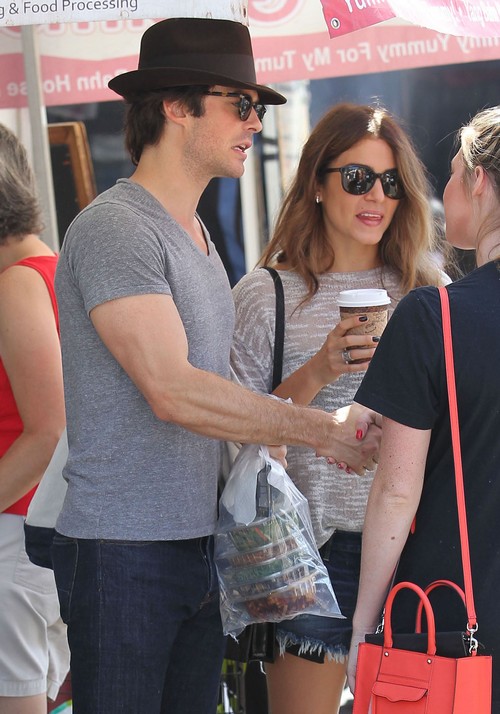 Well, whatever that was that Ian Somerhalder had going on with Nina Dobrev, I think we can safely say it really is over. The Vampire Diaries star has spent the last month bopping around LA with Nikki Reed who seems to be solidly cemented as his new girlfriend. If there was any doubt, Ian’s Instagram post aimed at Nikki that referred to a horse as “our baby boy” kind of erased it.

Nikki and Ian were once again spotted out at a Studio City Farmer’s Market this afternoon shopping for fresh veggies. Already these two are developing patterns- like Sunday seems to be the day that they are caught out shopping together and it’s clear that any real free time is now spent with each other. Meanwhile Nina is trying to show how little she cares about her ex moving out with her former bestie by flinging half of young Hollywood- and being photographed with the other half!

This new found romance with Nikki already seems to be registering as more serious as Ian’s relationship with Nina because it’s normal. Ian and Nina keep things hidden for well over a year and then they were always traveling together and criss crossing the world. Instead of all of that Ian seems to be settling into a very real and normal life with Nikki. Nothing is hidden and they aren’t only spotted together for epic trips and red carpets. Instead we are catching glimpses of them having a real life together. It almost makes me have to wonder how much of Ian and Nina’s relationship really was a showmance to appeal to Vampire Diaries fans.

Do you guys think that Ian and Nikki are looking more serious than he and Nina ever did? Tell us your thoughts in the comments below!