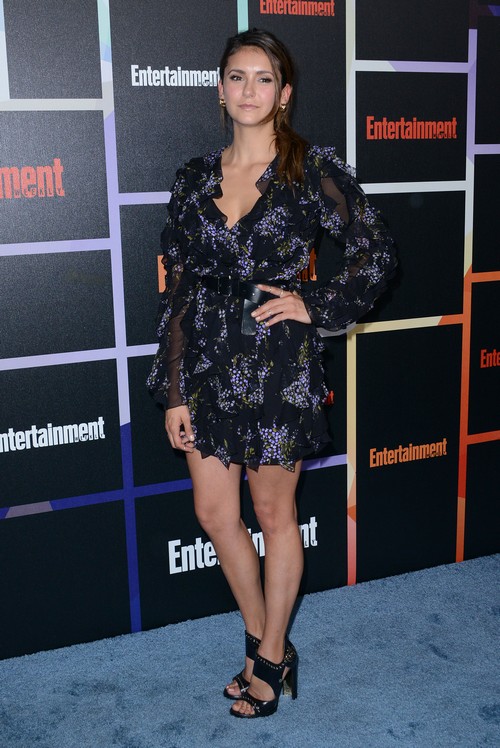 Nina Dobrev is doing everything she can to get a rise out of Vampire Diaries’ co-star Ian Somerhalder, even though her actions and efforts are failing dramatically. Ian has moved on with Nikki Reed, and he’s made that very clear. However, Nina clearly hasn’t gotten that memo, especially since she’s continuing to flaunt her flings with various dudes at Comic-Con.

Over just three days, Nina’s been linked to Ben McKenzie, Orlando Bloom, and Derek Theler. There were pictures released of Nina falling all over Ben, flirting with Orlando, and kissing Derek. If that’s not enough, Nina uploaded a pretty suspicious looking message on her Instagram earlier this week, writing, “It’s nice to be important, but it’s more important to be nice.”

Uh-huh. People are already taking that as a diss towards Nikki Reed, and can you blame them? Nina’s proving that she can’t handle Ian having a new girlfriend, and her method of acting out is to jump into flings with every other guy she meets. Of course, the media narrative writes itself, even if it’s not necessarily the truth.

But whether Nina’s trying to make Ian jealous or whether she’s actually just having fun, Ian couldn’t give a damn. He’s moved on from Nina, and he’s making that plenty clear. The photo ops with Nikki, the social media support, and public displays of affection – all of these are moves he never made with Nina, so I think we’re getting his message loud and clear.

What do you guys think? Are Nina and Ian truly over for good? Let us know your thoughts in the comments below.