Ian Somerhalder and Nina Dobrev Back Together – Couple Share a Kiss at People’s Choice Awards! (VIDEO) 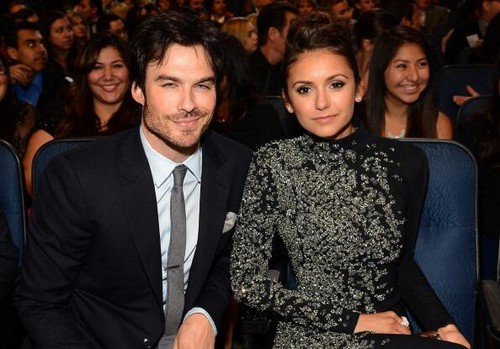 Ian Somerhalder and Nina Dobrev, who were once an official couple, won the People’s Choice Award for Favorite Onscreen Chemistry last night. They were quite friendly as they accepted their prize and, even though they did address their break up in a playful way, their impossible-to-deny chemistry — real life and fictional — has everyone wondering just how broken up they remain. Are Ian Somerhalder and Nina Dobrev secretly back together, just keeping their relationship on the down low until their careers (or The Vampire Diaries) needs a little pick-me-up?

Even though Nina was sort of seeing celebrity dancer Derek Hough after the split, during their time together Nina was rumored to be hooking up with Ian — for a friends with benefits situation. This made the public wonder: are they really over each other? While a celebrity romance/relationship itself entertains the public, the waiting and waiting and hoping and hoping for a broken pair to reunite generates a similar allure.

Ian and Nina’s relationship is interesting because, just as they broke up in real life, their onscreen romance went into overdrive, heating up in all sorts of ways. TVD fans are waiting for them to get back together officially . . . and many believe it’s only a matter of time.

After they were called onto stage (and after the presenter referred to Ian as Ian SomerHANDLER), they began their adorable banter. Of course it sounded rehearsed. Because OF COURSE they knew they were going to win.

“Wow, thank you,” Ian begins. “This is crazy. Can you believe this is almost five years in the making?” Nina adds, “Right, yeah. What’s crazier though, Ian, is that at the beginning of the show Elena actually hated Damon.”

What do you think about Ian and Nina? Do you think that the kiss they shared on stage is the beginning of a beautiful rekindling — of an old flame perhaps? We hope so! Watch the video below and tell us what you think of their sizzling chem.