Ian Somerhalder Missing Nina Dobrev At SXSW – Will They Hook Up Soon? 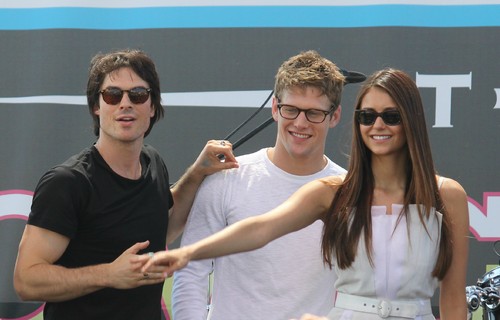 Ian Somerhalder and Nina Dobrev have been very busy lately, but are they finding time for each other? Ian’s been traveling a lot during his hiatus, and after visiting New Orleans for Mardi Gras last week, he’s now in Austin for the SXSW South by Southwest film and music festival.

Ian participated in several panels for charity events and non-profit organizations, subjects that he’s clearly passionate about and has devoted much of his time and effort to. However, even though he’s clearly having a lot of fun, our sources tell us that he’s also missing a certain lady in his life. While Nina and Ian are not officially reunited, nor has anybody close to them confirmed anything, there’s been enough hints dropped by sources over the past year to conclude that the spark has reignited between them.

It’s not hard to imagine why – after all, they did date for several years, and they still have to see each other almost every day on set. Even though they’re not publicly seen together much, they could be trying their best to avoid the type of rabid fan speculation that followed them around while they were together and during the initial stages of their relationship. Either way, if Nina and Ian are friends or whether they’re something more, they would obviously miss spending time with each other. And whether a hookup is impending or not, that really depends on when they’re meeting next and what the state of their relationship will be when they reunite. If the rumors are true and they really are back together, then I imagine they’re definitely making time to spend together on the down-low, away from the paparazzi and media-crazy Los Angeles.

Do you guys think they will hookup soon? Or will they stay professional and refuse to engage in anything, especially while the Vampire Diaries is still shooting? Let us know your thoughts in the comments below.