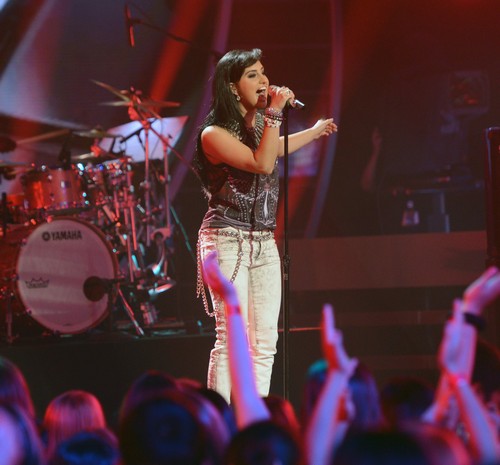 Jena Irene sang, “We Are One” on the finale of AMERICAN IDOL this week for her song she would sing at the finale if she is crowed the winner of Idol season 13.  This week each of the finalist sang three songs: one their possible winner song (a previously unrecorded song); one their choice and another Simon Fuller’s choice.

On last week’s episode Jena sang “Titanium” by David Guetta and Jennifer loved her rendition saying, “Listen, you hit all the high notes and that was awesome.  This is one of the most difficult songs to sing, I think.  In the beginning to me it felt a little shaky.  It just felt a little stiff.  Maybe it was the high notes.  You have to unclip yourself and you have to walk down, it is what it is.  You have two more songs to sing and I know the one we picked for you, you are going to murder.  I’m not worried about you.”