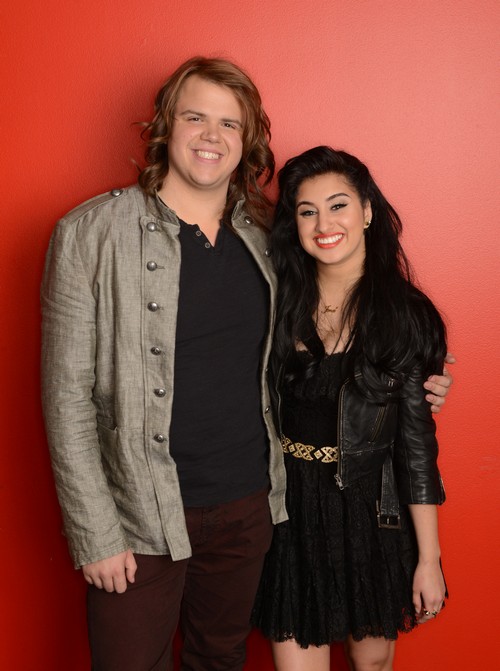 It’s another exciting night for AMERICAN IDOL on FOX. Season 13 is really heating up and we are very close to finding out who will be the next Idol. On tonight’s episode the Top 2 finalists perform in Part 1 of the finale.

On last week’s episode with the Grand Finale one week away, the Top Three finalists took the stage in hopes of impressing the judges and winning America’s vote. In a milestone 500th episode of AMERICAN IDOL XIII, with video shoutouts from past winners, such as Carrie Underwood, Phillip Phillips and Jordin Sparks; Alex Preston was voted out of the competition.  Did you watch last week’s episode?  If you missed it we have a full and detailed recap, right here for you.

On tonight’s episode the top two finalists, rocker Caleb Johnson and Wild Card Jena Irene Ascuitto, take the stage to battle it out on the last performance show of the season at the NOKIA Theatre L.A. LIVE in Downtown Los Angeles. One will be crowned the next AMERICAN IDOL. Tune in to see who impresses the judges – and America. The race is tight, it really is too close to call, either one of them has a chance of winning the whole thing.

Judge’s Comments: Keith Urban – “Fantastic, Jena! Firstly, I gotta say Simon that was a great song choice. Listen I just want to say the way that you owned that stage is so good, that’s a sign of a real pro. The progress you’ve made has been phenomenal. There’s a few issues with breath control, you’re like a jocky running a Kentucky derby and you took it home.” Jennifer – “I was going to say the same thing about the energy in the room, because it is electric right now. You did a really good job, it sounded really good. I’m not going to over talk it, it was a good start.” Harry – “You know Jena it was fantastic, one of my favourite parts was when you started walking and then started walking double time. It shows you really enjoy being on stage. Great choice great job!”

Caleb Johnson is singing “Dream On” by Aerosmith, a song selected for him by Simon Fuller. [VIDEO HERE]

Judge’s Comments: Jennifer – “That’s what you gotta do! This is the finale, this is it! You know you got to come on and you got to deliver you got to carpe diem, you got to do all that and that’s what you just did. You should think Mr. Fuller as well, because that song might have did it right there.” Harry – “As powerful as the ending was, don’t forget to take the same focus and the same energy at the end of the tune to the beginning. Really great job.” Keith – “Caleb, you literally had me with the opening phrase of the song. I disagree with Harry, the way that you arced that song at the beginning and you wrapped it up. Simon Fuller you should start a song that’s music based…oh wait you did.”

Jena Irene has chosen to sing “I Can’t Help Falling In Love” by Elvis. [VIDEO HERE]

Judge’s Comments: Harry – “Jena, so I can very clearly hear the influence on this song, that you have probably listened to other performers and studied them. What separates you from those other performers is you are able to set those influences aside. It was absolutely beautiful Jena.” Keith – “You did this song two weeks ago and it was so good you inspired someone else to do it. That’s the mark of a true artist in my opinion. Absolutely beautiful baby.” Jennifer – “What I love about that song is your soul comes through, you’re so incredibly talented and when you sing that song it makes me want to do things I’ve never done before. Again, the competition is so fierce tonight, tough job for America tonight I wouldn’t want to be in their position. I love you, I think you’re amazing.”

Judges Comments: Keith – “All right, all right. Caleb! Firstly, I love the fact that Paul wrote that song for Linda, it’s a real, deep emotional song. Don’t get caught up in the gymnastic aspect of it, don’t lost the feeling.” Jennifer – “I agree your power is undeniable, but at the end of the day when that soul comes through. I felt you holding back, but this is a different song. That’s what it required that it was missing was more heart and less of the power. But, you sounded amazing.” Harry – “These are two heavy weight fighters, you and Jena, you’re going at it. I think you won the first round Caleb, who do you think won the second round? As great as it was I think Jena won the second round. I don’t envy the voters.”

Jena Irene is singing an original song called “We Are One.”  [VIDEO HERE]

Judges Comments: Jennifer – “Jena! I never heard your song and I thought you were really good.” Harry – “I was wondering what that song would sound like live and it sounded just as good as it did in the studio.” Keith – “I loved the song Jena, it’s perfect for you. It’s great, loved it.”

Caleb Johnson is singing an original song called “As Long As You Love Me.”  [VIDEO HERE]

Judges Comments: Harry – “So, the way I look at it, you’re going to sleep tonight. You are like Joe Frasier. And, Jena Irene is Mohammed Ali.” Keith – “This is insane. After all of the performances tonight, I am dying to see what happens tomorrow. Congrats to both of you.” Jennifer – “You probably won’t sleep tonight, but you should, because you gave it your all. It’s going to be a tough night for everybody. Good luck America!”

That is it for tonight. see you tomorrow night when the winner of American Idol is announced!