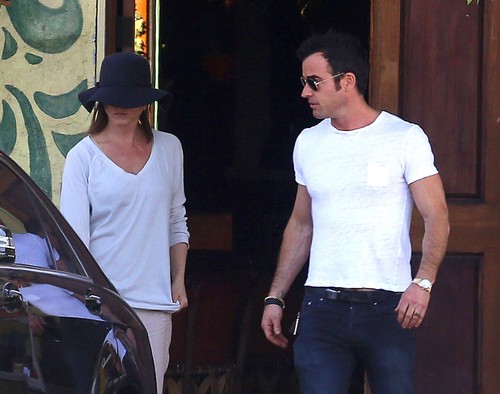 If you had said fifteen years ago that Angelina Jolie would become one of the biggest movie stars on the planet whereas Jennifer Aniston would be struggling to find good roles, people probably would have thought you were off your rocker. But lo and behold, that’s exactly what’s happened, through fate, luck, and Hollywood sliding doors.

After Friends ended, Jennifer was heralded as the next big thing by anybody and everybody in the entertainment industry. She was booking all the biggest roles, she was getting the best press, and she was with Mr. Hollywood himself, Brad Pitt. But alas, her reign at the top would soon end after Mr. & Mrs. Smith, which led to the formation of Brangelina and unfortunately, the decline of Jennifer’s career.

I don’t think that Jennifer’s career had anything to do with Brad Pitt, honestly. Whether he stayed with her or didn’t, I think her career would have progressed in the same way. It was her choice not to push herself to do more challenging roles, and it was her choice to keep playing the same character over and over again. I mean, there’s only so many ways you can play Rachel in Friends before the audience gets bored, right? Of course, that’s not to say that she doesn’t have career success – she does, but again, it’s for the same role in the same type of comedies. But for all her effort in doing indies [and now doing Cake], her chances at an Oscar have vastly diminished over the last decade. She didn’t take risks then, so producers and audiences aren’t going to be as willing to see her in any genre except for comedies. So Jennifer can keep trying for that Oscar with all her might, but it’ll be difficult to achieve now.

Angelina, on the other hand, has built up her brand image in such a way that she’s able to headline major blockbusters – that are gritty, dark, or commercial – but also direct feature films of any genre. While Jennifer can barely get an indie film greenlit with a solid budget, Angelina’s able to command a studio-sized budget for her directing projects. I mean, Unbroken is not a film that screams commercial success, no matter how you look at it. Yes, it’s inspirational and if done well, it can probably make a tidy profit. But it’s not an action movie, it’s not a thriller, it’s a solid, Oscar-baity drama – and in today’s world of superheroes and explosions, those rarely make big bucks.

But even then, Angelina’s managed to get studio backing for her efforts, whereas Jennifer Aniston still has to stick to independent financing to stretch her acting muscles beyond comedies. Jealousy is only a natural response to that, no? I don’t think Jennifer Aniston’s the only one who’s jealous of Angelina Jolie, and not even because she’s with Brad Pitt. It’s because she’s able to diversify her career in such a way that she’s able to do everything, something precious few actors and actresses can get away with.

Jennifer Aniston and her fiance Justin Theroux are spotted sneaking away from the set of ‘Cake,’ filming in East Los Angeles, California on April 22, 2014 – why is Jen covering her face – what is she ashamed of?