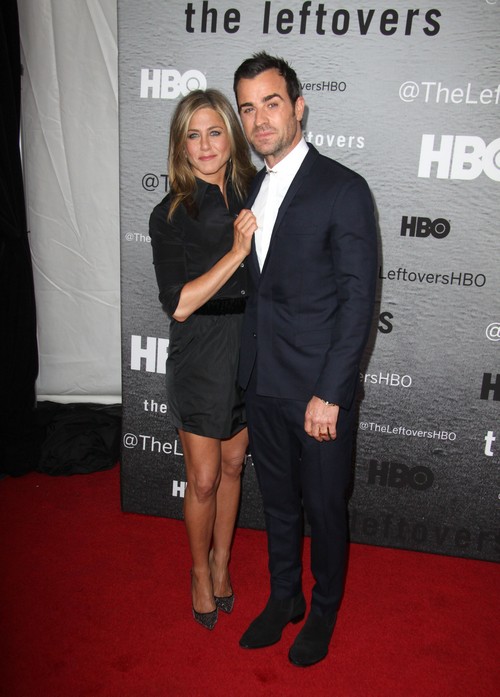 Jennifer Aniston and Justin Theroux can make as many public appearances and premiere stops as they want, but their lack of affection for each other has become so thinly disguised that I’m surprised anyone is even buying their relationship. For one, the couple is living on opposite sides of the country right now. Jennifer is doing… nothing in Los Angeles, while Justin shoots The Leftovers in New York City. And while other couples also do that, most of those other couples would be attempting to spend every free minute with their significant other, right?

Well, not so much with Jennifer and Justin. At this point, they’re only reuniting when one of them has a project that needs a quick publicity boost. Thus, don’t expect to see Jennifer and Justin hit the red carpet again until Jennifer’s new film comes out.

Fine, let’s just say that they hate the publicity. Let’s just say that they’re NOT using each other. In that case, why haven’t they gotten married yet? Yes, couple stay engaged for a long, long time, but we know Jennifer and Justin got engaged for a reason. They may have wanted to prove that they were serious about each other, or perhaps they just wanted that quick boost of publicity. For whatever reason that they did get engaged, there’s also another reason for them not going through with it. Could that reason be that they’re living on separate sides of the country right now?

A report from OK! Magazine suggests as much, with a source adding, “Jennifer was led to believe that Justin was only in New York to focus on his new show and other work projects.” Plus, Jennifer reportedly doesn’t get along with Justin’s NYC friends, and Justin doesn’t get along with Jennifer’s LA friends. Ah, all the hallmarks of a match made in heaven.