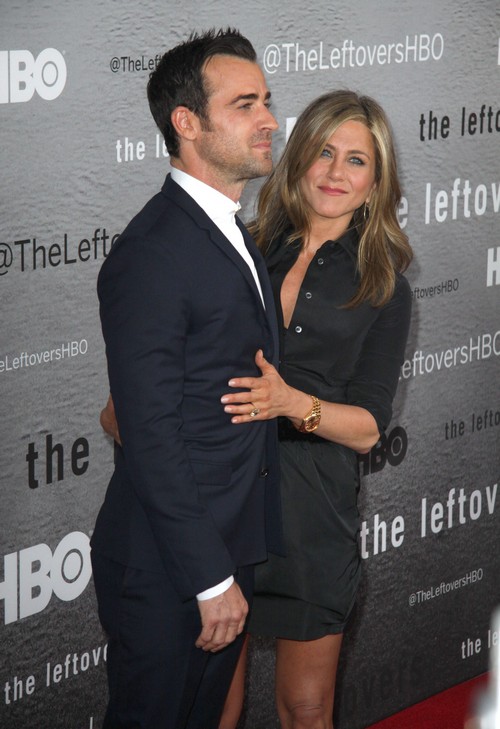 Jennifer Aniston and Justin Theroux haven’t made a real public appearance together since last September and so they totally raised eyebrows when they turned up hand-in-hand in NYC on Monday night. Justin’s new HBO series The Leftovers premiered and Jen walked the red carpet with him looking awfully clingy. While at first glance this night out could be seen as proof that the couple is indeed still together but if you look at the body language in many of the photos- well that is telling another story all together.

Jen is clearly all about Justin right now and while he is smiling he is also pulling away from her. It’s kind of ironic that we now have photographic proof of exactly what we have heard their relationship is now like. Justin has put the brakes on the wedding and is rarely even on the same side of the country as Jen, by choice. Meanwhile she keeps hanging on to this guy, hoping that the rock on her finger will turn into a marriage and that babies will follow.

Unfortunately Justin keeps sending out clear cut clues that he no longer needs the chaos and drama that goes along with dating Jen. I mean, they can’t even compromise on where to set up home base. Justin tried to live in L.A. But was grateful when HBO gave him an excuse to return to NYC. The Leftovers began filming in February but Justin was back in the city full time last fall. He and Jen haven’t exactly fixed things since then and one public appearance together should be taken at face value rather than viewed as a great assessment of their relationship now. Do you guys think that these two will ever marry or are they just dragging out the ending of their relationship.