Jennifer Aniston and Justin Theroux Wedding: Friends Beg Jen Not To Marry – They Hate Him! (PHOTO) 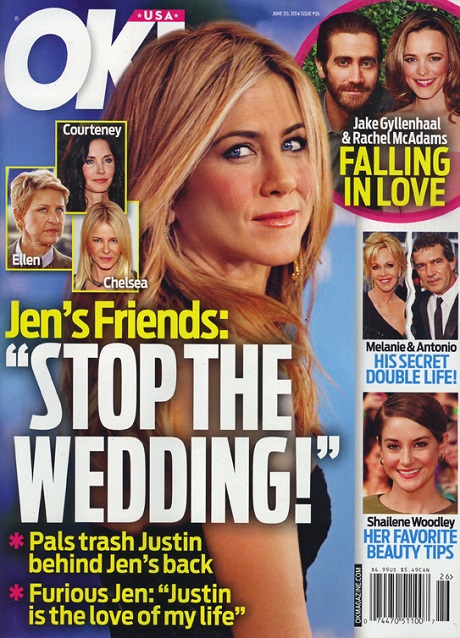 Jennifer Aniston and Justin Theroux have been engaged for years, but that doesn’t mean anything if they’re not planning to go through with their wedding. And from the latest reports, it’s really starting to look like the couple is having thoughts about getting married.

The latest cover issue of OK! Magazine suggests that Jennifer’s friends hate Justin Theroux, and they all want her to break up with him. Ellen DeGeneres, Chelsea Handler, and Courteney Cox are all [conveniently] against Jennifer getting married, because they would have nobody to turn to for a weekday bong hit if she settled into domestic life. Um, actually, I take that back. Jennifer’s friends should be loving the idea of Jennifer and Justin getting married, because then they’ll have two people to smoke up with!

Of course, OK!’s sources are never going to go with that story. Instead, they claim that Jen’s friends are all against Justin because they think he’s using her for his own gain. Um, they’d be right, but isn’t that what most Hollywood marriages are based on?

Either way, the gist of the story is that Jennifer wants to get married to Justin, but he’s not interested, and her friends hate him. Same old, same old.

Meanwhile, as one romance falter, another one blooms. According to OK!‘s sources, Rachel McAdams and Jake Gyllenhaal are falling in love with each other. What? They both have significant others? I’m sorry, I can’t hear you as I’m too busy coming up with couple’s names for them – Gachel? Ryllenhaal? Rake?

There’s also a story about Antonio Banderas‘ secret double life, away from his longtime ex-wife, Melanie Griffith. Apparently, Antonio spent every free moment he got away from Melanie cheating on her with a harem of younger girls. Um, is it considered a ‘secret double life’ if Melanie knew about it? The two had problems for a long time before their divorce, and suffice to say, Antonio’s secret double life wasn’t so secret – or double.