Jennifer Aniston And Justin Theroux Wedding: Ceremony Reportedly Scheduled To Go Down In Mexico This July! 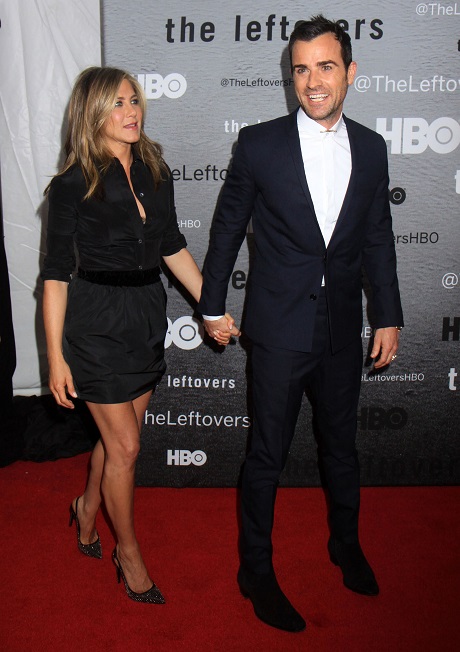 Jennifer Aniston and Justin Theroux have been doing their best to combat all the breakup rumors in the tabloids, including making touchy-feely public appearances at premieres. While you almost have to wonder why they’re trying so hard to validate their relationship, it’s always been interesting to see how they’ve put off their wedding for so long – especially since they got engaged eons ago!

Initially, we thought that Jennifer and Justin were waiting for Brangelina’s wedding to steal their thunder. But on second thought, that’s too outlandish to actually be true, even if it is good for gossip. Then, we just assumed that Jennifer and Justin were waiting for the right project to promote, which could be helped by the publicity from their wedding. Perhaps they figured that Justin’s TV show The Leftovers is flagging in ratings? Whatever it is, sources tell Star Magazine that Justin and Jennifer are going to get married at the end of July in Cabo, Mexico.

Jennifer and Justin seem to love Cabo, since they’re spotted vacationing there every time they have time off from their respective projects. It makes sense that they would hold the wedding there, especially if it means that they can evade US paparazzi.

Apparently, they are planning to have an ‘intimate ceremony‘ in Cabo’s Flora Farm, with a source adding, “It’s absolutely magnificent. There are luscious trees and greenery surrounding the entire property.”

Yes, even though it’s ‘intimate’, celebrity guests such as Courteney Cox, Chelsea Handler, Jason Bateman, and Ben Stiller will reportedly be in attendance. Plus, the location itself is massive and will cost buckets of money, but I guess all this falls under ‘intimate’ for a celebrity wedding.

Do you guys believe that Jennifer and Justin will actually get married in July, or is this yet another false alarm? Let us know your thoughts in the comments below.