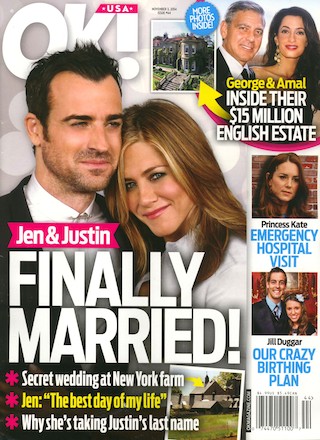 According to the report, Jennifer is taking Justin’s last name and declaring it the ‘best day of her life‘. Although the cover makes it seem as though the wedding already happened, the actual report suggests that Jennifer and Justin are still in the planning stages.

OK! Magazine’s source adds, “It’s really happening! Jen is excited beyond belief.” Right, and I’m sure it’s just a coincidence that wedding rumors are starting up just as Brad Pitt and Angelina Jolie launch their Oscar campaigns for their respective movies, Fury and Unbroken. Jennifer Aniston’s performance in Cake caused a lot of buzz at the Toronto International Film Festival, but the buzz has since died down and the movie’s faded in conversations. Jennifer might think that the perfect way to revitalize the flagging Oscar campaign is to inject a wedding into a it, a strategy that has worked time and time again. The only thing Jennifer can do to top a possible wedding is to get pregnant, but I wouldn’t put it past her to somehow accomplish both.

Anyway, whether Jennifer Aniston and Justin Theroux actually get married in a secret ceremony on a farm in the middle of nowhere, they want us to think that they will. See, us thinking about their wedding works just as well for them as pulling off an actual wedding – better, actually. This way, they don’t need to go through with an actual ceremony, and can continue their will they/won’t they crap all the way to the Kodak.