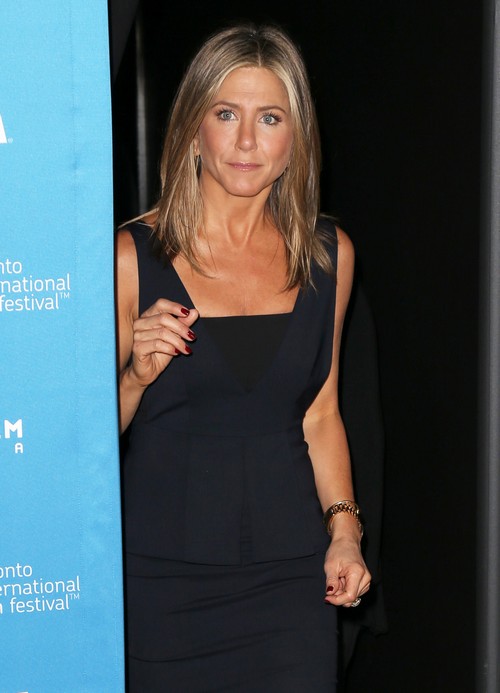 Jennifer Aniston is pregnant more often not lately, isn’t she? Pregnancy rumors concerning Jennifer Aniston and Justin Theroux are quite common, especially when the tabloids run out of things to talk about. But Jennifer has not only NOT been denying the rumors lately, but she’s actually been doing everything in her power to encourage them. Maybe Jennifer Aniston really wants a first baby…. In fact, during the weekend that Brad Pitt’s and Angelina Jolie’s wedding was announced, Jennifer turned up to a movie premiere in skin-baring outfit cupping her belly. Now, whenever a celebrity cups her belly at a PREMIERE with photographers taking a billion pictures, they want you to think one thing, and one thing only – that she’s pregnant with her first baby. Jennifer Aniston may or may not be pregnant, but she sure as hell wants you to think that she is. Why would she want that?

Oh, for so many reasons, not least of which is that her awards season campaign is about to begin. Jennifer Aniston desperately wants an Oscar, and this is the first time in a long, LONG time that she’s actually turned in a performance that’s even remotely awards-worthy. Yes, I’m talking about her widely praised performance in Cake, even though the movie itself was deemed mediocre. And an above average performance in a mediocre movie has become Jennifer Aniston’s best chance at an Oscar nomination, which is both a little sad and a little desperate. What, she couldn’t wait for a less competitive year and a better performance?

Alas, Jennifer’s not waiting, and she’s probably thinking that the pregnancy rumors will work as a double edged sword – not only will they help keep her in the public conscious for her own Oscar campaign, but they’ll draw attention away from Brad Pitt’s and Angelina Jolie’s campaigns. Except it will never work. Cake is not nearly as as strong of a movie as either Brad’s Fury or Angelina’s Unbroken, and no amount of pregnancy rumors is going to change that.