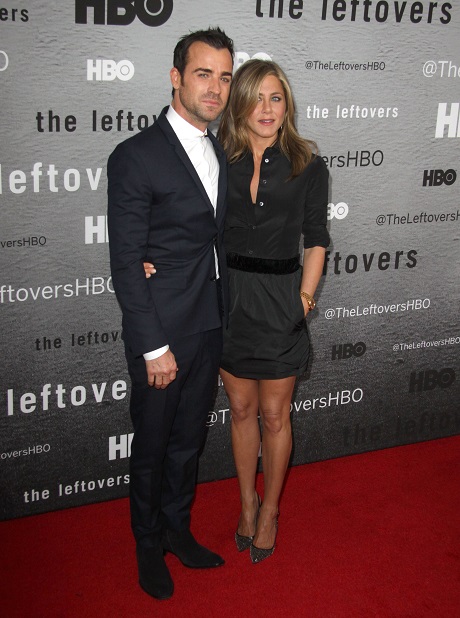 Ah, here we go again with the Jennifer Aniston wedding rumors! Will she ever actually marry Justin Theroux? My guess is probably not, but that doesn’t stop us from speculating and talking about it. Aside from recently talking about how Justin would kill her if she had any work done on her face, Jen also complained of being ten pounds over her target weight. Generally, she says that she feels best between 110-113 pounds and that she intended to get herself back into that range.

According to the Sept. 1st print edition of OK! Magazine, Jen recently put herself onto an even stricter diet than usual to shrink herself back down to fighting form — and it worked. She has lost the bit of curve that she had even two months ago and is ready to put on that white dress. Sources say that wedding plans helped to push Jen onto the diet because she wants to be in incredible shape as a bride. Now that she has accomplished this goal, is that wedding imminent?

Will Jennifer Aniston and Justin Theroux really walk down that proverbial aisle or swap vows on a beach somewhere? Or are they that couple that will always find a reason to delay things until they eventually split up completely? Are they stuck in a vicious cycle of making plans only to postpone them indefinitely? Do you think that it’s Jen who always seems to delay things or do they both take turns deciding not to commit? Tell us your thoughts in the comments below!