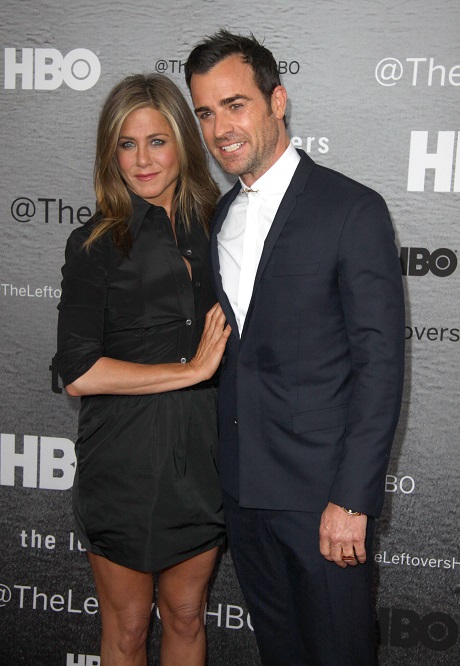 Jennifer Aniston and Justin Theroux‘s relationship has been the subject of much scrutiny for a while now, particularly their tortoise-like speed in planning their wedding. For many people out there, this mysterious (but much talked about) wedding has become a bit of a myth, and we’ll believe the couple is serious about marriage when we get official word that they’ve said I DO. But we might not be hearing those words anytime soon, as a recent report published in the recent edition of Life & Styles claims that Jennifer caught Justin getting a bit too close to Liv Tyler. Whoopsie.

Apparently, Justin and Liv were getting cozy with one another, which hurled Jennifer into a rage. “She went off on Justin and grilled him over the nature of his relationship with Liv,” a source (and so-called friend) reveals to the mag. “She seems to view Liv as the other woman — and she can’t stand her.”

Uh oh! Do you think this news is true? Is Justin Theroux cheating? Honestly, we’ve always thought Justin’s character to be a bit tricky to discern. There are some days when we feel like Justin wouldn’t do anything in the world to hurt lovely Jen; there are other days when we feel like he totally has what it takes to be a lying, cheating douchebag.

What are your thoughts on the matter, especially in regards to Justin’s overall character? Is he a good guy who would never cheat on Jen, and who’s yet another celeb being victimized by the media?

Here’s to hoping Jen and Justin get their priorities figured out and take the plunge already. We’re not saying people need to get married to be happy, but OMG . . . we’re just tired of hearing about their so-called wedding news and just want it to be over and done with already! Yikes!