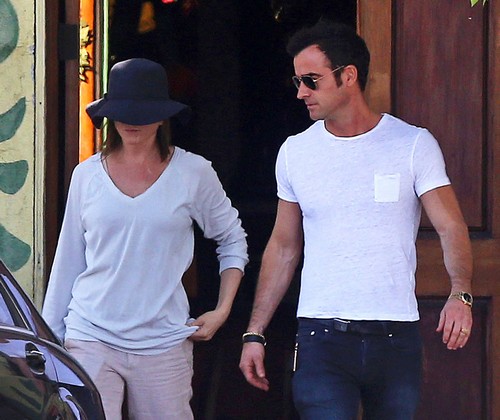 Despite rumors that Jennifer Aniston and Justin Theroux are planning to break up, sources close to the couple tell us that they’re still going strong. Just because they’re currently living on opposite sides of the country doesn’t mean that their relationship is going to fizzle, especially not with their rumored wedding date approaching.

We’re hearing that although they’ve had their troubles in the past, both Jennifer and Justin are finally willing to go through with their wedding. I think they realized that there’s only so long they can be engaged before the public starts to get restless, but there’s also other factors in play here. For one, both of their careers are actually getting busier, and they’ll only have a certain amount of time to plan their wedding before it becomes too late. For another, the longer they hold off the wedding, the likelier it is that they end up breaking up. They won’t have the obligation of sticking together for their marriage, and it’ll just be easier to call it quits.

But according to our sources, the biggest reason Jennifer’s waiting is because she wants to steal Angelina Jolie‘s thunder. Yes, the feud is over, blah blah. Look, it may be over on Angelina’s side, but you think Jennifer’s ever put that whole thing behind her? Here’s a woman who ostensibly stole her husband, and has the career that every actress in the world wants. Even if she’s put most of it behind her, she’ll likely still get pleasure in drawing attention away from her whenever possible. So in that regard, it looks like Jennifer might be planning her wedding for this fall – strategically, right before Angelina embarks on awards season.

We’ve been hearing that Brad [Pitt] and Angelina might also be getting married around that time to lend a boost to Unbroken‘s chances at the Oscars, but what will happen if Jennifer gets married at the same time? Obviously, Jennifer’s wedding would distract the attention from Brangelina’s wedding, and it’s also very likely that it would detract from their awards campaign.

What do you guys think? Will Jennifer and Justin get married in the fall, strategically distracting from the Angelina’s Oscar campaign? Let us know your thoughts in the comments below.