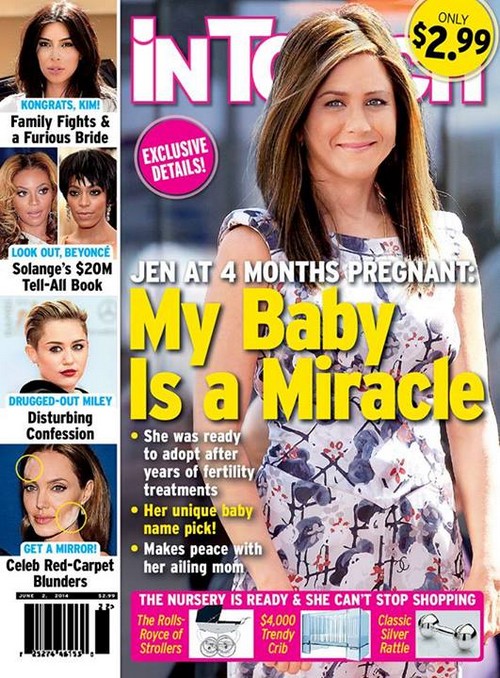 Here we go again with the headlines screaming that Jennifer Aniston is pregnant, but this time it might really be true! Think about it, the last few times we have seen Jen out and about she certainly does appear to be a bit bigger and she has also been spotted with on/off fiance Justin Theroux again. It looks like whatever was keeping them apart has been worked out and their relationship appears to be back on track again.

According to the June 2nd print edition of In Touch magazine Jen is about 4 months pregnant after going through several tough rounds of fertility treatments. Finally the actress seems to be creeping towards the middle of a healthy pregnancy and it has caused her to really put her life in check. Sources say that she has even put to rest her long-running feud with her ailing mother as she gets ready to be a mom herself!

Kim Kardashian and Kanye West’s wedding is just a few days away and sources say that she is absolutely furious as the in-fighting between her family and her baby-daddy has reached epic proportions. I think this fiasco is certainly going to happen but how long do you give that annoying couple’s marriage? Speaking of messy families, is Solange really contemplating writing a tell-all book? According to In Touch magazine she has been offered $20 million to dish the inside dirt. Do you think that she’ll do it? Would you need to grab a copy to read or could you care less about Beyonce and Jay Z’s marriage? Tell us your thoughts in the comments below!