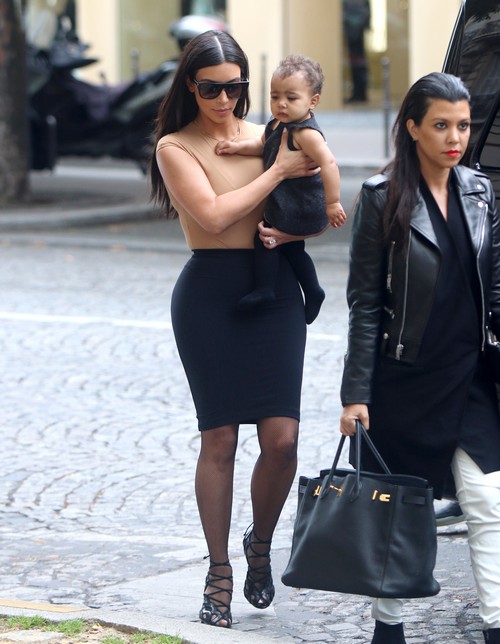 Kim Kardashian has once again taken to trotting out her daughter, North West, whenever she needs a quick publicity boost. Never mind that in just a few days, she’ll be getting married and will probably be the center of the media’s attention for that one day. For Kim, getting papped is like getting a quick fix of drugs – it satisfies her craving for attention, even if it doesn’t get rid of it completely.

This time, Kim was spotted carrying North while they went shopping at a Givenchy store with Kourtney Kardashian in Paris, France. Considering that Kim’s wedding is less than a few days away, and Givency has always had a strong relationship with Kanye West, is it possible that they’re doing some last minute wedding shopping?

On a more interesting note, let’s take a look at how miserable North looks, straddled to her mom. Every single time we’ve seen her, North has looked confused and unhappy, and it’s a stark contrast to how other celeb babies her age [most notably Prince George and Harper Beckham] behave. They’re always smiling and laughing, barring the occasional grumpy days, but North has always, always looked miserable in her mother’s arms. It’s probably because she’s spending the entire time wondering where her real ‘mom’ is, a.ka. the nanny who actually takes care of her and raises her. But unlike Kate Middleton, Kim will never trot out the nanny in public, largely because it would become immediately obvious that North was much more attached to the nanny than her own ‘mother’.

Plus, we’ve never, ever seen any candid photos of videos of Kim and Nori together, not counting the staged ones that Kim clearly posts on social media for our benefit. It’s too bad really – I don’t think that Kim understands that she’ll be living with North for the next twenty years of her life [at least], whereas her fame will only last another few years, tops.

Kim Kardashian carries her daughter North as they go shopping at Givenchy store with her sister Kourtney on May 20, 2014 in Paris, France.