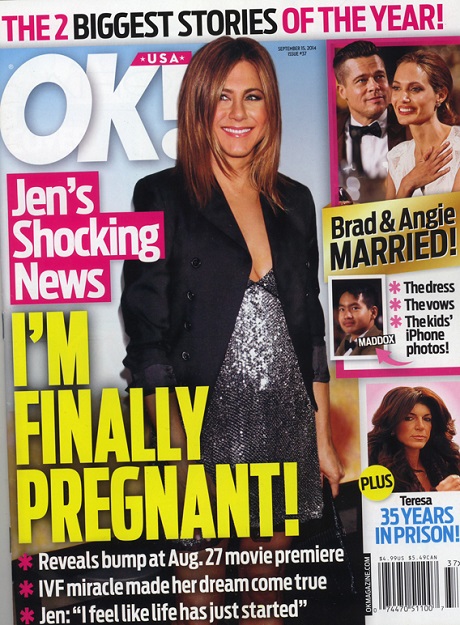 If the rumors are to be believed, then maybe nearly ten years after ending their marriage both Brad Pitt and Jennifer Aniston are both getting their own version of a happily ever after. Brad Pitt’s wedding to Angelina Jolie nearly two weeks ago at Chateau Miraval in France has been widely discussed since the moment that they confirmed their changed marital status. After 9 years together it had started to seem unlikely that, in spite of having 6 kids, these two would ever marry. They really did surprise us with their announcement.

Not only did Brad Pitt and Angelina Jolie get married, but they also proved that if an A-list couple wants to keep their life secret they really can do it.

So, how is Jennifer Aniston doing? Well, last week, we heard that she might have been a bit shaky after learning about that wedding but this week is a whole different situation. According to the Sept. 15th print edition of OK! Magazine, Jen is not only very happy but at age 45 she is rumored to finally be pregnant. After years on the baby merry-go-round, it seems that an IVF treatment has actually worked. So while Brad and Angie are getting used to wearing those rings Jen is pregnant and totally in baby mode.

While Jen may be expecting, we still aren’t sure of the status of her relationship with maybe-fiance Justin Theroux. The two have been engaged for two years but, in the last several months, things seem to have really soured between them. They have only made one red carpet appearance together this year and choose to live on opposite coasts. So, while Jen may be actively preparing for motherhood, that doesn’t necessarily mean that Justin Theroux is planning on being the daddy.

Do you think that this is it and that Jennifer Aniston is finally pregnant with a baby via IVF? Is she really just as happy as the newly married Angelina Jolie and Brad Pitt? Tell us your thoughts in the comments below!