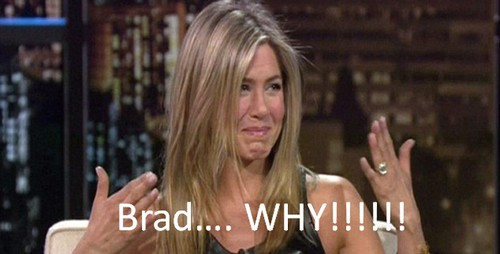 Jennifer Aniston’s reaction to this whole thing probably isn’t a cordial one — at least not on the inside. In other words, we still think Jennifer Aniston is still pretty bitter about this whole romance and the breakup that shattered so many people’s hopes and dreams.

The bitterness has probably increased since Brad Pitt married Angelina Jolie, the woman who crashed Jennifer Aniston’s plans to marry Brad Pitt. There’s no doubt Jennifer has some negative feelings surrounding this marriage.

Yet, Jennifer Aniston has recently been involved in countless media stories, most notably those about pregnancy and never ending marriage schemes.

Where do you think Jennifer Aniston fits into the scenario of Brad Pitt and Angelina Jolie’s new life? Will Jennifer Aniston allow her bottled up emotions to feel relieve themselves or will she keep them pent up until they make her a mental wreck?

Reportedly, Brad Pitt and Angelina Jolie have been together over 9 years. The couple is clearly in love and, while we’re very happy for them, after years of being subjected to waiting for their announcements, we have a feeling Jennifer Aniston isn’t experiencing similar emotions. What do you think? Leave your thoughts in the comments section below!