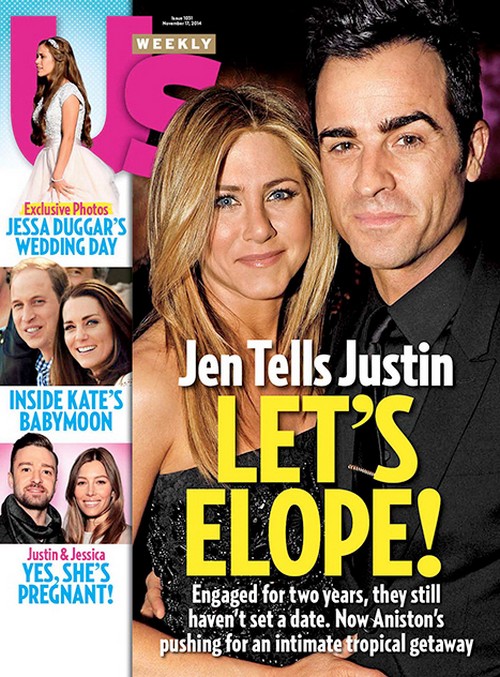 Jennifer Aniston can’t get Justin Theroux to marry her and give her a wedding so she’s planning to elope by surprise and it’s on this week’s cover of the tabloid, Us Weekly. Jennifer Aniston is getting on my nerves lately. Sorry guys, I know she’ll always be Rachel to you, and to some extent, she’ll always be Rachel to me too. But you know what? There’s a certain point where we have to face the facts and realize that Jennifer Aniston is NOT a victim of tabloid manipulation, nor is she a particularly talented actress. She can’t just use the media whenever she feels like it, and then expect them to ignore her the rest of the time. She’s worked hard to cultivate her image, and that involved her being present 24/7 in the media. And now that she’s getting backlash for it, she wants to take it all back? Nuh-huh, it doesn’t work that way.

See, US Weekly uploaded an article on Jennifer Aniston’s ‘surprise elopement’ plans with fiance Justin Theroux, probably in order to help Jennifer’s increasingly desperate attempts to get that Oscar nomination. However, when Jennifer was asked about it while promoting Horrible Bosses 2, she replied, “I haven’t read this week what’s happening with us. So I have to look in to it.”

It’s US Weekly, so I’m pretty sure your team ran it by you before they leaked it, but you keep pretending as though you’re above all this. Celebitchy did a pretty accurate take-down of the article, and we concur: Jennifer Aniston is lying her ass off. She’s blaming the tabloids for making up stories, but half the time, they’re all sourced from inside the industry to people with strong connections to Jennifer Aniston. Even if she’s not personally approving these stories, there are people out there working on her behalf who are so doing. And so she can keep claiming that she’s not a hypocrite for hating on the tabloids, but she’ll just be lying to herself.