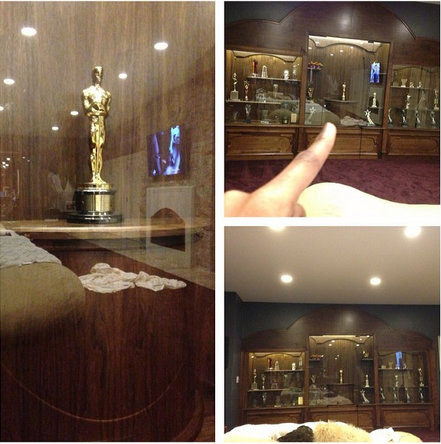 Jennifer Hudson is in hot water for shading a colleague AGAIN. It seems that right after Lupita Nyong’o won the Academy Award for Best Supporting actress in the film 12 Years a Slave, Jennifer Hudson shared a picture of her home trophy cabinet and basically said that she would be needing more room because there would be more Oscars. Maybe she should work on getting another movie before she rubs that crystal ball, yes? But, that is neither here nor there. The issue here is the mere fact that Jennifer had the unmitigated gall to tweet that while Lupita was having her moment.

Of course Jennifer’s twitter followers took offense to this and called Jennifer out for shading and stealing Lupita’s shine. Normally, I would say that people are overreacting, but I actually agree with them this time. Jennifer has never been known for her social graces, so it isn’t surprising that she engages in Twitter arguments with her followers — LeAnn Rimes style. And, like LeAnn, her tweets are often littered with grammatical errors and misspellings.

Some twitter follower was probably trolling J-HUD about Lupita being the new kid on the block and she got defensive: wrong move. To Jennifer’s credit, she did say congrats to Lupita, but to immediately show a pic of her own trophy is classless and basically takes back the compliment. Here’s the bottom line: It wasn’t her time to shine, and if she had any grace about her she would have ended her commentary after saying congrats, instead of reminding everyone that she too was an Oscar recipient and insisting that she’d win more in the future.

If you want to win more Oscars, great; take the time to hone your craft and work hard to get those projects. Do not, however, raise your hand like an overzealous third grader and say, “Hey, everyone! Remember me? I won that award too and I’ll win more. Take that, Lupita!”

It was an infantile move and it wasn’t cool. I’m gonna go out on a limb and say that Lupita deserved her Oscar more than Jennifer Hudson. Her performance in that very emotional and tragic film was way above tier. Lupita played a slave who was physically, mentally, and sexually abused by her sociopathic master and his wife, whereas Jennifer basically got an award for playing a chubby R&B singer when she was, in fact, a chubby R&B singer. That’s not a stretch. Jennifer didn’t exactly have to tap into any raw emotion to play Effie, and I always believed she got that award for her singing rather than her acting ability.

Maybe she should have just enjoyed the show and consulted a dictionary/thesaurus before unleashing her tweet for the entire world to see. What do you guys think? Are we overreacting or was Jennifer Hudson out of line?