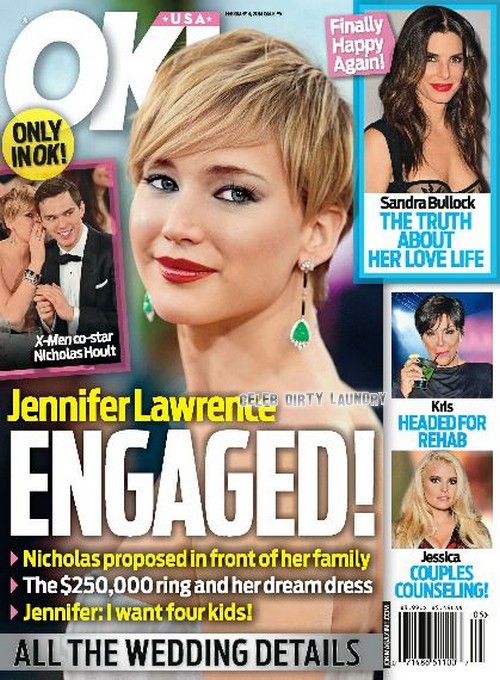 Jennifer Lawrence is once again back in the spotlight, probably to her detriment in the long run. JLaw’s running on some serious risk of overexposure in the media world, but this story’s so unlikely that it probably doesn’t even count as a headline.

According to OK! Magazine, which we all know is terribly reliable, Jennifer is engaged to her longtime boyfriend, Nicholas Hoult. Now, before I start tearing this story to pieces, let’s look at the way this story’s actually possible. For one, Jennifer’s finally started taking Nicholas as her date to awards shows, something that people don’t do unless they’re very serious about their partners. She made out with him in full view of the Golden Globe viewing audience when American Hustle won Best Picture, and she’s not shy about showing her affection for him, both in candids and interviews. This is a stark contrast to just one year ago, when she and Nick were broken up and she was riding awards season solo.

Anyway, despite all that, I still think the story’s not true. First of all, if it was, we’d be hearing it from someone other than O.K. Second of all, while I think there’s a possibility that Jennifer and Nick might get engaged in the future [provided they last that long], I think Jennifer knows that her career is still too packed for her to be getting engaged right now. She’s booked solid for the next two years, when exactly will she have time to get married? Plus, she’s only 23 years old and doesn’t even have a house yet – is O.K. seriously implying that she’s going to settle down when she’s literally just hit the big time?