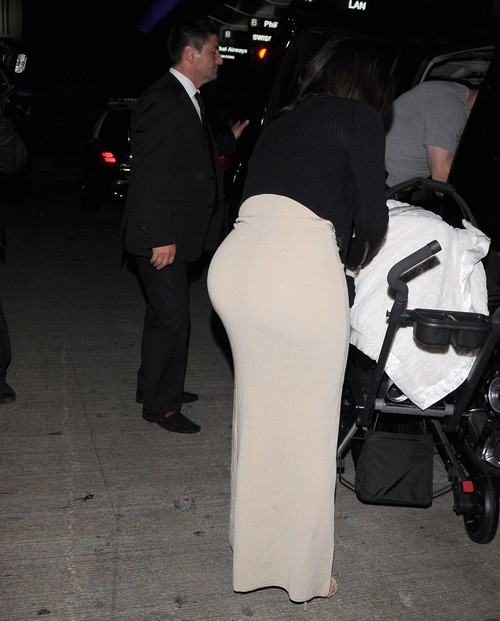 A battle of the most infamous butts in Hollywood – except that one belongs to a legitimate singer/movie star and the other belongs to an attention-obsessed reality star. Between Jennifer Lopez and Kim Kardashian, it should be easy to guess who’s who.

According to new reports, Jennifer Lopez is apparently sick of Kim Kardashian’s reign in the spotlight, especially how everyone is now obsessed with Kim’s [likely fake] ass. A source tells the National Enquirer, “Jennifer is sick  of all the talk about Kim’s butt and how much attention she gets for her curves. She thinks it’s pathetic, because she believes it’s blatantly obvious Kim’s had some type of lift or treatment to get such a gigantic bottom that sticks out like it does.”

Apparently, Jennifer is especially unhappy because she’s put in years of hard work to make herself fit, but here’s Kim, and she’s getting so much attention even though all she does is walk around and get photographed.

Granted, Kim’s already denied rumors that she’s gotten butt implants – but does anyone believe her? It seems like every time we see her, she’s getting thinner but her butt’s getting bigger. There’s only so much longer than she can continue to defy the laws of nature before she gets outed.

Of course, Kim definitely doesn’t reciprocate the feeling of disdain towards JLo. Kim’s apparently a big fan of Jennifer Lopez, and she’s constantly trying to get on her good side. But then again, Jennifer Lopez and Kim Kardashian definitely don’t run in the same circles [although I would say Casper Smart isn’t far off], and Jennifer thinks that spending time with Kim would be beneath her.

Well, duh. What A-list celebrity would be caught spending time with Kim? Especially of her own volition? Yeah, that’s never going to happen. But Jennifer needn’t worry – even if Kim gets a lot of attention for her ass, most people have concluded that it’s fake, just like the rest of Kim.