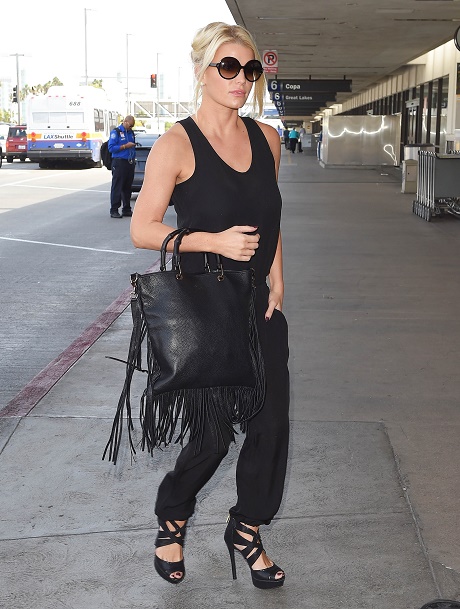 Four months into their marriage, Jessica Simpson and Eric Johnson have run into hurdles in their too-perfect relationship. The couple is well past their honeymoon stage, and into their constant bickering stage – so much so that insiders are suggesting that divorce might be a possibility.

A source tells Star Magazine, “They barely talk anymore, and when they do, it turns into a huge fight. One of their fights got so bad recently, Eric walked out!” The source adds that the couple’s biggest problem is intimacy, or to be more specific, Jessica’s fear of getting pregnant again. Jessica Simpson just went through two back-to-back pregnancies, and she’s reportedly wary of getting pregnant again. And considering that she just gave birth, birth control isn’t really an option at this stage.

Now, if the problem was JUST intimacy and fear of sex, Eric and Jessica might have worked through their differences easily. But Star’s report also claims that Jessica has a tendency to turn towards alcohol whenever things get tense between them, and their sources add, “Jessica yelled at him, calling him a lazy freeloader, and said the reason she hadn’t left him yet was because of the kids.”

Right, and Jessica Simpson is only coming to this realization now? Eric Johnson has been out of the NFL for quite a while, and his seeming disinterest in finding another gig should probably have tipped her off before she got married. But you know, the pregnancy glow and the newly weds glow probably prevented her from seeing the truth, and now it’s much too late.

Sure, Jessica Simpson can get divorced from Eric Johnson, but they already have two kids together and it’s only four months since they got married. She’s not going to give up so easily, nor is she going to give anyone the satisfaction of saying that she didn’t try to fix her marriage – even if it makes her miserable. But there’s Jessica Simpson in a nutshell for ya – a glutton for punishment.

What do you guys think? Will the tabloids be writing about a Jessica Simpson/Eric Johnson divorce next? Let us know your thoughts in the comments below.