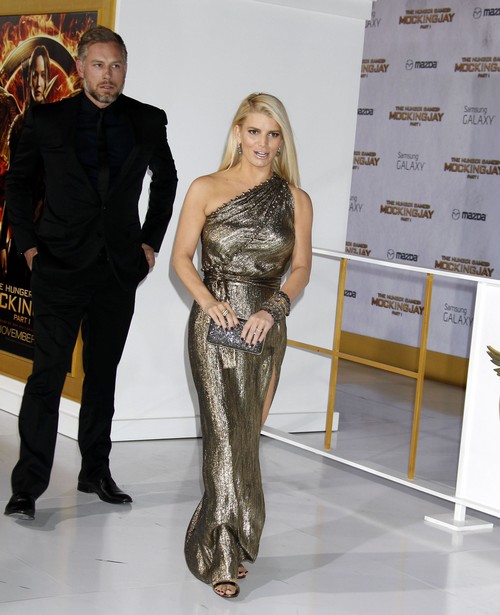 Jessica Simpson has lost weight, and now in the eyes of the media, that means that she’s obsessed with sex – or at least sex with Eric Johnson. It’s a bit discriminatory to assume that larger women wouldn’t have sex swings, but for the sake of this report, let’s just go with it.

According to the National Enquirer, Jessica Simpson has installed an R-rated ‘sex swing’ in her home, apparently mounted over her bed. A ‘source’ explains that Jessica made her hubby Eric Johnson very ‘happy’ when, “he came home and there she was, swinging back and forth, in a tiny negligee and no underwear.”

And I assume this source is either a creepy stalker who was looking through the peephole or was told these intimate details by Eric and/or Jessica themselves? To be fair, there were a lot of rumors concerning a possible divorce between Jessica Simpson and Eric Johnson, even though they’ve only been married a few short months. Some rumors claimed that Eric was cheating on Jessica, others claimed that Jessica’s fame became too much for them, and some others even suggested that Jessica’s weight was coming in between them.

I’m assuming the weight issue has been surpassed because Jessica Simpson managed to lost a TON of weight in the intervening months, but now the focus has shifted to sex. Either Jessica Simpson is leaking these reports to help restore her bombshell image, which wouldn’t be that surprising. Or the media is just having fun playing around with her image. Either option is possible, but I think a sex swing is pretty far out there for either rumor. This isn’t Weight Watchers territory anymore, and as such, we can’t expect everything concerning Jessica Simpson to be weight-related. This whole sex swing business seems too random to be coincidental, but we’ll have to wait and see what other rumors Team Simpson starts spreading over the next few months.