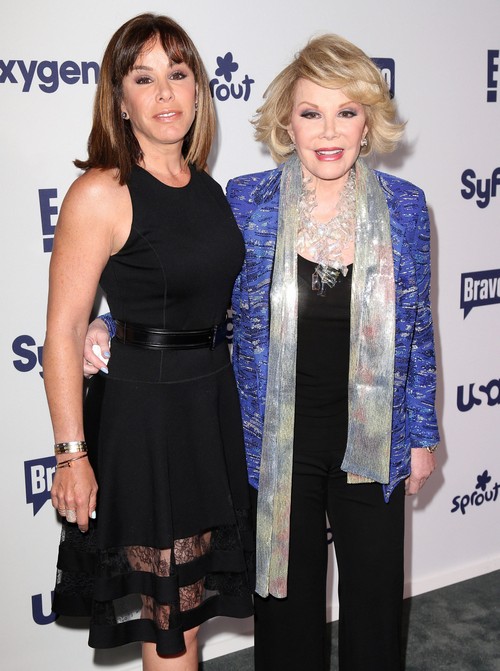 Melissa Rivers’ world has been turned upside down in a matter of a couple days, as on Thursday, her mother, the legendary Joan Rivers, was rushed to the hospital after she stopped breathing during throat surgery. As CDL reported, Joan, 81, was at a clinic having surgery on her vocal cords, when she stopped breathing. At one point, her heart reportedly stopped beating.

Joan’s look-alike daughter, Melissa, rushed to New York to be with her mother and has released statements that her mother was “resting comfortably,” and another telling Rivers’ fans how much their support and kind words would mean to her mother. As we reported to our CDL readers, Rivers is on life support and is completely reliant on the machines to stay alive. Given the tragic circumstances, the family will have the difficult decision of deciding on whether or not to turn off the life support in a couple days if there has not been a miraculous improvement to her condition. Rivers was initially put in  a medically-induced coma after arriving at Mount Sinai Hospital on Thursday.

Now, Melissa is devastated but is trying her best to remain hopeful that her condition will improve and she won’t be left to make, what would likely be, the most difficult decision of her life..whether or not to take her mother off life support. The two have been extremely close, and have worked together on-screen and off for years. Melissa is reliant on Joan for so many things, and they are so close. If Joan were to be taken off life support, it would completely destroy Melissa , as she would be filled with regret that she was never able to say goodbye to her mother. Melissa understands her mother has only so much time left, but she knows that Joan is a strong woman who likely had many years left. At this point, she has no plans to take her mom off life support, and doesn’t even want to talk or think about that possibility as she is refusing to believe that there is a chance her mother’s condition won’t improve.

While she is remaining hopeful for now, and family members are rallying to be with Melissa and her son as they closely monitor Joan’s status, family and friends know there is a very strong possibility Joan won’t pull out of this given her age and grave condition. No one is proposing any “what-if’s” to Melissa for now, but friends and family are prepared to be there for her should she be faced with making the decision to take her mom off life support. Melissa, meanwhile, is refusing to think her mom will not pull through, but may very soon be faced with a devastating reality that she may not have her mom around any longer. Life support is typically meant to maintain the patient’s life long enough for the body to return to a life-sustaining level of function. The doctors will likely speak with Melissa in the next couple of days if they believe Joan will not survive without the assistance of life support.

We will keep you posted on Joan’s condition and, of course, update you on Melissa’s painful decision should she need to make the difficult choice of ending her mother’s life in a couple days.  In the meantime, tell us what you think. If faced with making a decision, what do you think Melissa will do?