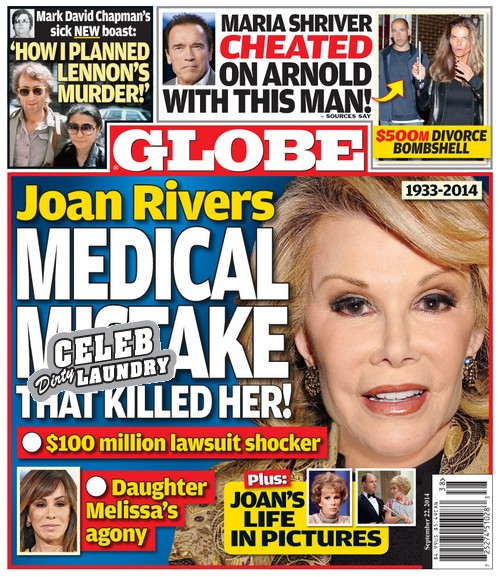 The world is still reeling from the tragic loss of comedic genius Joan Rivers, Rivers’ daughter Melissa and her friends and family just laid the 81 year old to rest a few days ago. But, as new discoveries are made in her death, which occurred when her throat surgery went horribly wrong and caused cardiac arrest, it doesn’t come as a shock that Joan’s family is already preparing to sue the clinic where Joan went for her life-ending surgery. The latest report reveals that the biopsy that caused Joan her life, wasn’t even necessary. And, GLOBE Magazine has all the details surrounding the shocking $100 Million lawsuit. The September 22nd edition of GLOBE also offers viewers a beautiful spread of Joan’s life in pictures, making it definitely worth picking up this week.

Aside from the ongoing tragedy surrounding Joan River’s death, GLOBE magazine’s cover teases exclusive details surrounding Arnold Schwarzenegger and Maria Shriver’s $500 Million divorce scandal. And, Maria might not get a dime out of the terminator turned politician, because she has been cheating on him and GLOBE has the pictures to prove it! There is no doubt that Maria Shriver will be fuming when the September 22nd edition of GLOBE hits the newsstands, because judging by the cover all of her dirty laundry is about to be aired.

In other news, there are new details emerging in Beatles’ legend John Lennon’s murder case. Mark David Chapman has gone public and is boasting “How I Killed John Lennon” to anyone who will listen. Lennon’s murder is easily one of the most infamous Hollywood murders, and fans of the legendary band will definitely have to pick up the September 22nd edition of GLOBE.

Once GLOBE magazine hits newsstands this week, we will definitely be picking up an issue so we can dish all the details to you on the Joan Rivers lawsuit. Do you think that Joan’s family should sue the clinic where she went in for her endoscopy? And, what about Maria Shriver’s divorce scandal? If she was cheating on Arnold Schwarzenegger will she get any money in the divorce? Don’t forget to check CDL later this week for more detailed reports on all of the hot issues in the September 22nd edition of GLOBE magazine.