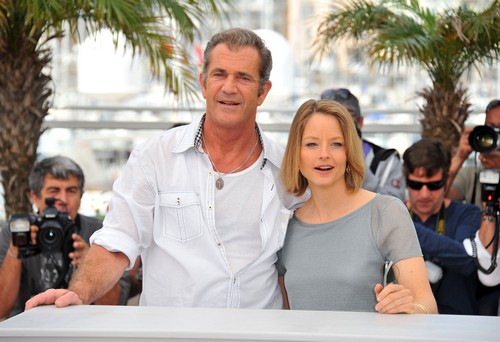 Jodie Foster and Alexandra Hedison haven’t even been married for a month before the tabloids have begun their attempts to break them up. According to recent tabloid rumors, Jodie’s and Alexandra’s honeymoon period has already ended, and apparently because of Mel Gibson. Eh, I don’t believe this story, but if they’re going to blame Mel Gibson, I’ll hop on board.

Alexandra reportedly doesn’t want Mel to be a part of their lives together, even though Jodie and Mel have been close friends for years. In fact, Jodie Foster was one of the few people to defend Mel Gibson after his ostracism from Hollywood. She even cast him in her film, The Beaver, and tried to get people to take a chance on him again. Alas, that clearly hasn’t happened, and it looks like Jodie’s now having to choose between her wife and her best friend.

Sources close to the couple tell the National Enquirer, “Alexandra met Mel at a function in Malibu years ago, and she didn’t like the way he was preaching with a holier-than-thou attitude.” Plus, you know, there’s the whole issue of him being a raging bigot and woman-beater.

The sources also add, “Jodie’s friendship with Mel is a big bone of contention between her and Alexandra. She’s made it clear, now that they’re a married couple, she doesn’t want to socialize with him.”

Jodie and Alexandra got married so quickly, so there’s probably a lot of things that they didn’t get a chance to go over. But would Alexandra really put an ultimatum on Jodie just weeks after getting married? I mean, I can understand her not wanting to hang out with Mel, but to force her wife to do the same?

Then again, who Jodie hangs out with now will matter more than ever, considering it’s also a reflection on her. Do you agree? Let us know your thoughts in the comments below.