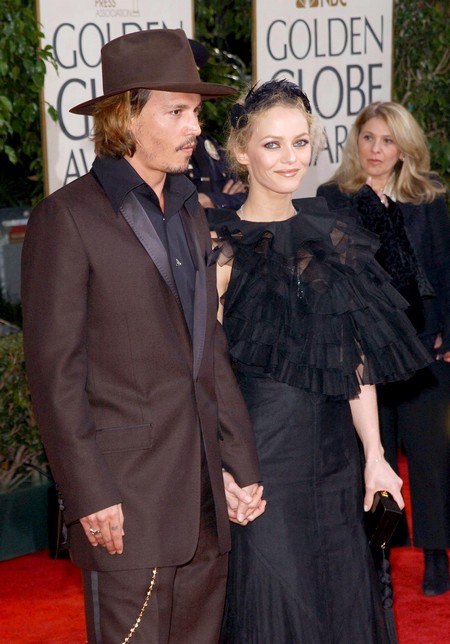 Did Johnny Depp and Amber Heard breakup? Reports that Depp and Vanessa Paradis were spotted on a romantic date have emerged. On Christmas Eve, nearly a year ago, Johnny Depp proposed to his girlfriend Amber Heard, and she said “yes.” Since Amber and Johnny’s official engagement, there still has been no news on the wedding or even a date chose, and it is becoming painfully obvious there may not be a wedding at all. When Johnny proposed to Amber, who is almost half his age, no one believed the relationship would last due to the huge age difference. And, it looks like those skeptics were right, because Johnny is rumored to be getting back together with the mother of his children, Vanessa Paradis.

Johnny Depp is 51 years old, and Amber Heard is only 28. Like every couple with decades between them, the sparks rapidly fizzled and Johnny began questioning their age difference and fearing he was losing Amber. In a desperate attempt to try and keep his bride-to-be interested, Johnny began trying to appear young and cool, and decided to pursue a career in music again. He even has gone as far as to try and start a band and set up a concert tour for next year. What 28 year old would dump a rock star?

Well, apparently ever becoming a rock star wasn’t enough to keep Amber Heard interested in Depp. According to new reports, Amber and Johnny have split up and gone their separate ways, and Johnny is dating his ex Vanessa Paradis again. The October 13th edition of Star Magazine reveals that Johnny and Vanessa had a romantic dinner together at SoHo House in West Hollywood. Star’s source was seated not that far from the couple and dished about their romantic dinner saying, “Johnny and Vanessa were seated at a dark table in the back. They were talking and laughing, it seemed flirty. She had on a sexy black dress and her make-up was all done, she looked beautiful.”

We’re all about mature co-parenting, but Johnny doesn’t need to go out on the town with his baby-mama to check in on his kids. If Johnny and Amber aren’t broken up, then she definitely should be worried. Then again, maybe taking his ex out on romantic dates id Johnny’s way of trying to keep his young fiancee’s attention. Do you think Johnny and Amber are still together? Is he cheating on her, or have they broken up and he is reconciling with Paradis? Let us know what you think in the comments below!