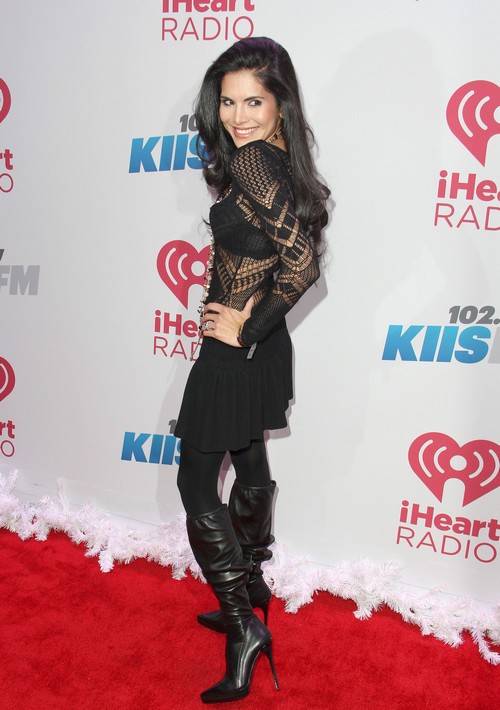 Can you ever be too thin? Apparently real housewife, Joyce Giraud, doesn’t think so. The Real Housewives of Beverly Hills star is catching fire for making a controversial statement in the latest episode of the reality show: “You can never be too thin, too rich or too sexy.”

If you don’t know, Joyce is a former beauty queen and was named Miss Puerto Rico twice. A few of her cast mates felt Joyce was being irresponsible and advocating eating disorders.

“Joyce saying you never be too thin really bothered me, because in fact you can. Young women have enough problems with eating disorders like anorexia and bulimia, and then to have an ex-beauty queen perpetuate that one can never be to thin is just wrong,” Brandi Glanville wrote on her Bravo blog.

Carlton Gebbia also took the time to call Joyce out in her blog. “Joyce, didn’t you just blame others for your tag line? Girls out there are dangerously anorexic. So yes Joyce you can be too thin, if you’re promoting anorexia. Be responsible. Wrong message.”

Carlton is referring to the tagline each housewife says in the opening of every show to introduce themselves to the audience. In her tagline, Joyce says, “In Beverly Hills, they say you can never be too young, too thin, or too rich.” Joyce has since said that she dislikes the line and blamed producers for making her say it.

Once the backlash started, Joyce tried to explain her comment. She stated that she knew the comment was superficial and that she only said because it has now become a “running gag” on the show. Although she never overtly apologize, she did admit that you can be too thin.

“And for the record, I do believe you can be too thin, as I am the living example of someone who was bullied for being too thin.”

Doesn’t that sound a little like “don’t hate me because I’m beautiful?” While eating disorders are a serious subject, it doesn’t seem Joyce meant any real harm in her statement. We’ve all had a slip of the tongue every now and then that is completely insensitive or offensive.

And wasn’t Brandi the one claiming LeAnn Rimes had an eating disorder and was abusing laxatives to control her weight? If she is so concerned about young girls and eating disorders, she should have reached out and helped LeAnn instead of bashing her in public. Brandi’s just jumping on the bandwagon to make herself look superior.

What is your take on Joyce Giraud’s comments? Was she promoting eating disorders or was it just another careless comment? Join the conversation and tell us what you think.

Editor’s Note: Hate the game, not the player. Joyce was merely repeating what is a well-known fact in the fashion and entertainment world, not advocating it as a positive goal. Let’s keep in mind that the the leading New Year’s resolution is to lose weight. Our society views fatness as weakness and shame – a character flaw. When the designers, the producers, the corporations and the customers (YOU) start to rebel against the skinny standard then there will be change, not before.