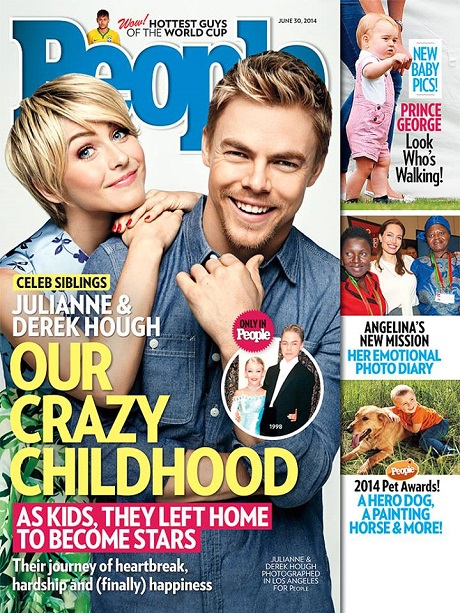 When you think of Dancing With the Stars two of the names that first come to mind are Julianne Hough and Derek Hough. She got her start on the show at 17 before crossing over into film and playing with a music career and Derek is a fan favorite who also dabbles in music. I think we have all heard bits and pieces of their story — about how the brother and sister left home while in grade school to go and seriously train in ballroom dance overseas.

Julianne and Derek went to live with Mark Ballas’ family in London and they all attended the Italia Conti Academy of Theatre Arts together. According to a cover story in the June 30th print edition of People magazine, the time spent overseas wasn’t exactly a blast.

Julianne found herself lost and alone in train stations at ten years old. She also has talked about being molested while with the Ballas family and how being immersed in the ultra sexy world of Latin ballroom wasn’t exactly the best or safest place for a little girl. She loves the career that she has now but she says that it is sad to realize there are absolutely no photos of her as a little girl looking like a child. Every picture includes stage make up and a spray tan instead.

Derek hasn’t exactly breezed through the whole experience either, as he has been the subject of gay rumors for years. Derek is rarely attached to a woman despite the fact that they collectively love him and he seems to live a lot of his private life in hiding. It makes me wonder if he is still struggling to come to terms with who he really is and how he needs to live his life.

Do you think that some of the rough twists and turns of Julianne’s childhood are connected to some of the hard partying that she does now?