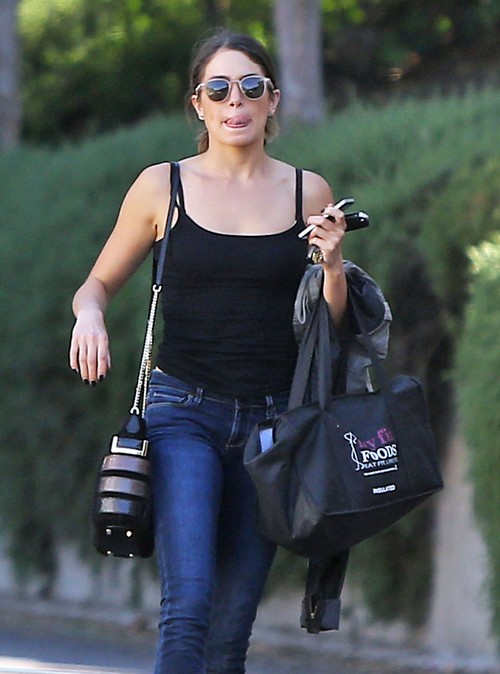 It’s only been a few months since Nikki Reed separated from her husband, Paul McDonald, but she’s already moving on – and with Derek Hough, no less. What do we take away from this? Well, a couple of things. 1) Nikki Reed can’t stop dating reality stars. 2) She doesn’t seem all that hung up over the end of her marriage. 3) Derek Hough can’t stop dating his sister’s friends.

I mean, that’s obviously how they met, considering Nikki and Julianne Hough were good friends. This makes it, what, his third girlfriend from Julianne’s friend circle? I mean, he just recently broke up with Nina Dobrev, but I guess he thought it would be a good idea to try again? I don’t even understand how his sister’s ok with him doing this, but to each their own.

Anyway, a ‘source’ tells US Weekly that Nikki and Derek were spotted making out at Rock & Reilly’s in Los Angeles in mid-April. And by source, I mean Nikki’s reps and Derek’s reps decided to put this information out there. It’s US Weekly, and neither Nikki nor Derek are famous enough to warrant this kind of attention, especially when it’s several weeks after their ‘date’ took place.

Whether this is a PR romance or a genuine rebound for both of them, it certainly comes across as contrived. Nikki’s trying to move on from her ex-husband, sure, but doesn’t it all seem a bit too… prearranged? And while I don’t think Derek has anything to hide, I do feel like his relationships tend to always be of the same variety.

Well, however and wherever they met, it’s highly doubtful that this relationship will last longer than a few months – at most. The source also agrees, and claims that Nikki and Derek are just ‘hanging out’ and that it’s nothing serious. So something to distract the public then?

‘Twilight’ actress Nikki Reed stops to visit a friend in the hills of Hollywood, California on April 29