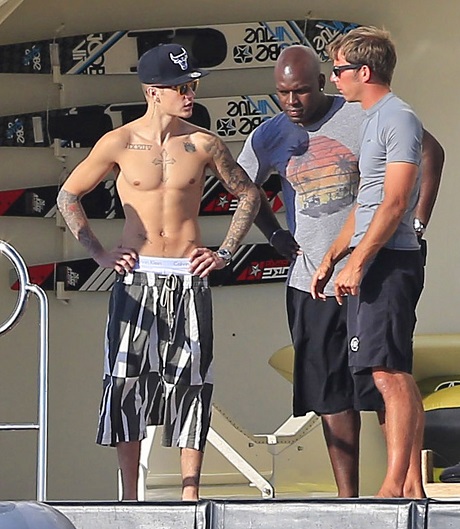 Justin Bieber continues to prove to the world that he and his team are a classy, classy, classy bunch. Bieber and his camp have been accused of bribing Canadian border officials, which is not only a sleazy act but a serious crime. One of the border officials was fired after accepting a $10K bribe; allegedly, Bieber happily handed over the cash-money-celeb-chump-change in exchange for his entourage’s safe passage.

As you might be aware (or suspect), some of the people Bieber surrounds himself with have criminal records, which is the reason he needed to bribe the official in the first place.

And Bieber and his team didn’t stop there. The TMZ report also suggests that “Bieber’s camp reportedly gave a female officer at the Niagra Falls border thousands of dollars in backstage passes to get members of his posse into the country while he performed.”

Holy moly, Bieber! You’ll do just about anything, won’t you?  Canada has a very strict policy on allowing people with criminal records to cross their borders, so it’s no surprise that this little exchanging of goods could spell MAJOR trouble for Bieber. Nobody’s exactly sure when the bribes went down or took place; however, Bieber performed a couple of shows in Toronto last year, so it could’ve been around this time.

Since these unbeliebable shenanigans have gone down, the Canada Border Services have cracked down on their policies and made sure everyone working there UNDERSTANDS COMPLETELY that accepting bribes is not acceptable.