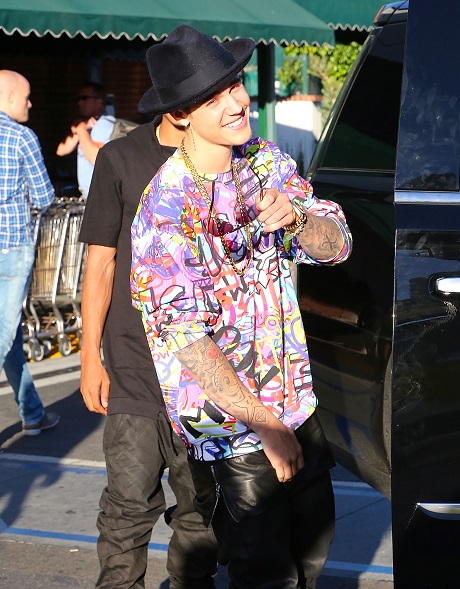 Justin Bieber is well on his way to being arrested again. And the person putting the handcuffs on the pop star may be one of his new neighbors. The Beverly Hills Police Department has confirmed they paid The Biebs a visit six times this weekend. Justin recently moved into a luxury building and had a few parties over the weekend. 75 guests on Saturday and 20 on Sunday partied hard in Justin’s apartment. Neighbors called the cops to complain about the noise as well as unwanted “fans” standing on the street.

Saturday’s party alone included FOUR visits by the BHPD. Police showed up at 8:30 PM, 12:50 AM, 1:50 AM, and 3:00 AM. All were noise complaints. TMZ even has video of police entering the building just minutes after a large group of young girls arrived to join the rager.

However, by the time they arrived, the music had been turned down and Justin was cooperative with the police. They let him off (this time) with just verbal warnings.

“We are asking him to be a respectful neighbor. We prefer Mr. Bieber be respectful of his neighbors and the community,” Sergeant Max Subin of the BHPD said.

Although the singer, who has become more known for his recent “bad-boy” behavior rather than his music or hair, was not cited over any of the incidents, the damage has already been done. The party originally started on the building’s rooftop deck. Pictures show Justin and his crew left the rooftop littered with liquor bottles and cups.

Neighbors also say that drug use was also obvious. They say the hallways and elevators reeked of pot. “There were bimbos lining up to do drugs in the lobby bathroom,” an unidentified source tells TMZ.

Justin may be a new resident in this building, but neighbors are already planning to take a stand. The police cannot make any arrests on noise complaint if they don’t personally hear or see anything happening (Remember, Justin had already turned down the music by the time the police showed up). However, police have reportedly informed several neighbors on how to place Justin under a citizen’s arrest.

The Biebs really doesn’t know how to get along with his neighbors. He is currently on probation for egging his former neighbor’s house in Calabasas. The same neighbor also claimed Justin spat in his face after he confronted the singer on his excessive partying.

Do you think Justin should be more respectful towards his neighbors or is he just being young and they (along with the police) have it out for the Biebs? Join the conversation and leave a comment.