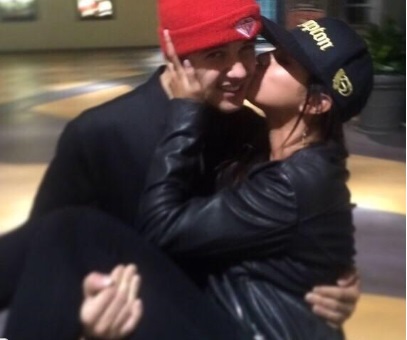 It’s no secret that there is some bad blood between Kendall Jenner and Selena Gomez over Justin Bieber. Last spring Selena and Kendall were BFF’s and were spotted together multiple times, however their whirlwind friendship quickly went south after they partied together at Coachella and once the booze started flowing Selena learned that Kendall was hooking up with Justin Bieber behind her back. Since their falling out Selena and Justin have been on again and off again several times, and Kendall even publicly dissed Selena in Toronto.

On August 6th photos were leaked of Kendall Jenner and Bieber partying in Spain, and they were snapped holding hands as they left the party together. Selena had been adamant that she and Justin were officially over for a few weeks now, but when she learned Justin was out in public and hooking up with the one girl she loathed, she decided she wanted him back. On August 13th the news hit the internet that Jelena had suddenly reunited when multiple fans claimed they seen them on a date at a movie theater. On August 14th Justin confirmed the rumors by posting a mysterious photo on Instagram of himself carrying Selena through the movie theater while she kisses him on the cheek. Soon after Justin posted the photo, he quickly deleted it.

Rumor has it Justin deleted the photo because when Kendall Jenner saw it she freaked out on him. We spoke to an inside source close to the situation regarding the Kendall-Justin-Selena love triangle, and they revealed that Justin’s trip to the movies was just a pity date. The source went on to explain, “Selena is hot mess right now, and Justin feels guilty and blames himself for her problems. After Selena found out he was hooking up with Kendall again she had a meltdown and begged him to hang out with her. He was afraid Selena was going to do something stupid like track him down while she was wasted and cause a scene, like she did at the studio while he hung out with Madison Beer. Justin really likes Kendall, and Selena knows it and it drives her crazy.”

Our source went on to explain that Kendall has had enough of Selena’s drama, and she is ready to give up on Justin unless he cuts ties from Selena. “Kendall truly hates Selena, and hates the fact that Selena lays guilt-trips on Justin. Kendall is very ambitious and she is a good influence on Justin, she thinks that Selena is bringing him down and is the reason he parties so hard.”

Do you think that Selena and Justin’s trip to the movies was just a pity date? Are you Team Jelena or Team Jendall? Let us know what you think in the comments below!