Justin Bieber And Chris Brown Collaboration: Two Troublemakers Hit The Studio And ‘Do 1 For The Fans’! (PHOTO) 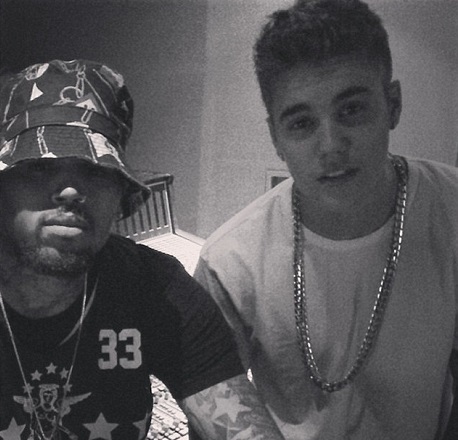 Prison food and a sad man named Mumbo Jumbo couldn’t break Chris Brown’s stride. The terrible terror was released on the 2nd of June after serving 108 days in prison for a parole violation, but instead of burning plastic forks, Brown headed back into the studio and teamed up with Justin Bieber for a new song.

What? Really? A new collaboration between Bonnie and Sad Clyde? Chris Brown’s fans shouldn’t worry too much about his career, because songs like “Stuck on Stupid”, “2 Young 2 Give A F**k”, “Bitch I’m Paid”, “Go To War For Ya” and the seminal classic “F**k Um All” will never disappear into obscurity.

Bieber and Brown – wouldn’t they make a great band? – took a black and white Instagram-selfie with the caption, “Studio, me and CB did 1 for the fans.” This exciting new collaboration is still in the pre-production phase, but we already know that the song will be about women in cars, women in bars, and women behind bars.

Brown and his bro share more than just beautiful music. Thelma and Man-Child Louise are in more legal trouble than Charles Bronson (Google him!). The astoundingly mature Bieber egged his neighbour’s house in January. This innocent Humpty Dumpty genocide caused $20,000 in damages and gave Bieber a one-way ticket to court. It is not yet known whether he will be charged with a misdemeanour or a felony.

Speaking of rotten eggs, Brown was also in trouble for writing graffiti on the front of his Hollywood Hills property last year. The greatest lyricist in the history of the universe cited the First Amendment and mumbled something about the freedom of speech during his tête-à-tête with officials. He received a $376 fine for “unpermitted and excessive signage” and was forced to remove his “artwork”.