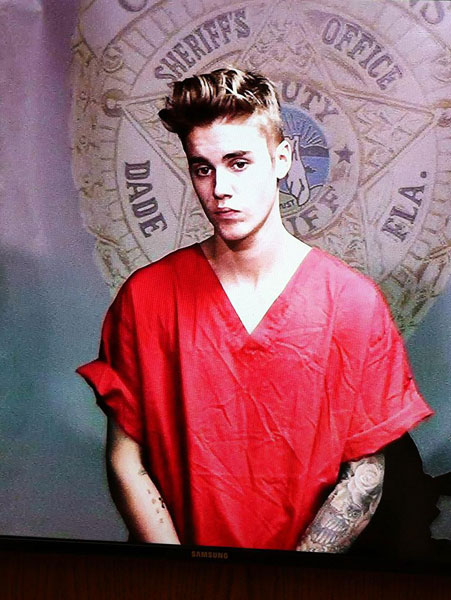 Justin Bieber was the recent object of a faux bet (and brilliant ad), where the U.S. and Canadian Hockey teams played to LOSE… Bieber that is. Well, now Biebs may have found himself in a more serious bet with higher stakes… one that would require him to be subject to random drug testing. All bets are off if he fails a drug test since he’d be subject to jail time.

Law enforcement sources, as reported by TMZ, have shared that the Florida State Attorney has offered Justin a plea deal in his recent DUI/resisting arrest case and the terms are going to make this entitled brat wish he’d been a little wiser before getting behind the wheel that fateful night in Miami.

As part of the deal, TMZ states that prosecutors will drop the charges if Bieber agrees to 1) plead no contest to reckless driving, 2) complete 40 hours of community service, 3) attend an alcohol ed course (they really think one course is going to help?!) 4) attend a “victim impact panel” to hear stories of relatives of DUI victims, and 5) install an ignition interlock device for 3 months (because he wouldn’t possibly just choose another of his many cars?!)

Though the terms seem awfully loose to many, to Biebs it will be a crushing blow to have to swear off drinking and drugs when he’s built his entire new lifestyle around both… not to mention what this would do to his hangers-on who live with him and encourage this lifestyle. This may be too much for Bieber to commit to.

Likely, when given the choice, Bieber’s people will ultimately choose the plea deal for him if they judge the state’s case is too strong chance fighting at trial, knowing he’d never survive in jail, nor would his already flailing career. But hey, can you imagine the street cred little Biebs would acquire for doing a real stint behind bars – like in general population? Of course this would never happen – his little butt would be safely tucked in a special isolation unit far from those real thugs after whom he models his behavior.

The question is whether or not he’ll be able to get around the random drug testing. Arrogant Bieber will probably take the deal, thinking he can worm his way out of the random drug testing through traveling excuses, etc. Although he’ll be required to submit his travel plans to the court and the testing is said to happen anywhere, anytime, we all know that celebrities have successfully pushed the envelope with court rulings for years. Bieber is just cocky enough to believe he can pull off the same.

Maybe the U.S. and Canadian hockey teams can unite and play to send Bieber somewhere else far, far away! 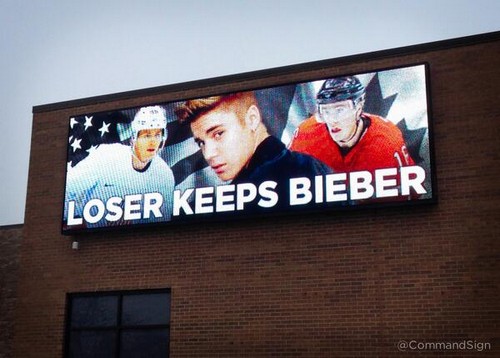