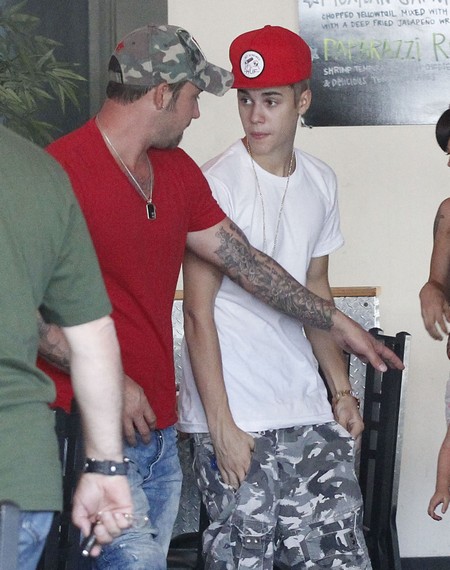 Looks like the apple didn’t fall very far from the tree. According to reports, Justin Bieber‘s father, Jeremy Bieber, has a history of assault and jail time. Keep in mind, this is the same father that’s been encouraging his teenage son to party, smoke up, drag race, and basically act like an a**hole.

Jeremy was also reportedly on the same flight as Justin when his entourage was wreaking havoc, reportedly harassing the air hostesses and smoking inside the plane. If it was any other parent who found out their kid was behaving this way, wouldn’t it be immediate grounds for locking them in the house and never letting them leave? But of course, Justin’s parents need their meal ticket, and thus they stay quiet. More than stay quiet, they enable his partying and his rule-breaking idiocy. And clearly, his father has enough experience with breaking the law, so he’s probably proud that his son is taking after him in so many ways.

According to Radar Online, Jeremy Bieber has been arrested several times, and he’s also reportedly assaulted people in the past. And then, during one of Justin’s custody hearings in 1995, Justin’s mother [Pattie Mallette] also alleged that Justin’s father has a ‘long history of criminal activity’, and she added that Jeremy even threatened to kidnap Justin at one point. Man, Jeremy must be so proud.

I guarantee you, if Justin wasn’t famous and making the kind of money he’s making now, his father would have nothing to do with him. And even though Justin seems to think very highly of his father, what teenager wouldn’t be happy with a dad that let them do whatever they wanted? Sources also tell Radar that ever since Jeremy popped back into Justin’s life, it’s been chaos. The source adds, “Justin’s manager, Scooter Braun, is the voice of reason, and tells him stuff Justin doesn’t want to hear, and Jeremy is the opposite.” And right now, it’ll only get worse until someone steps in, and it honestly might be too late for even that. Seriously, Justin’s father makes even Dina Lohan look like a caring mother.

What do you  guys think? Let us know your thoughts in the comments.