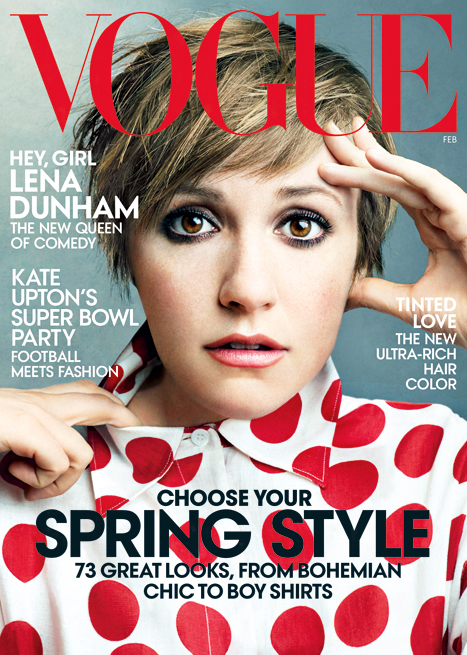 According to a new report, Kanye West is furious at Anna Wintour for choosing to put Girls’ Lena Dunham on the cover of Vogue over his fiance, Kim Kardashian. His anger is mostly focused on the fact that Anna has always shied away from putting anything less than size zero models and actresses on her cover, but when she did break the trend, she did it with Lena as opposed to Kim.

Um, Kanye’s delusions are shining brighter than ever. As much as Lena Dunham is polarizing, both in the fashion and television community, there’s no denying that her show has hit a cultural landmine. Also – and most importantly – the demographic of Girls is pretty much the biggest demographic that buys Vogue Magazine. And if we’re being fair to Anna, she’s been trying her best to be a bit more diverse with her cover choices lately, and it’s not like she’s never put a normal sized woman on the cover before. Kate Winslet and Jennifer Lawrence have both covered Vogue, and they’re both curvy, by Hollywood’s standards.

Anyway, let’s take another look at Kanye’s pipe dream. A source tells Radar, “Kanye thinks that Kim has a much bigger fan base and appeal than Lena. To Kanye, it’s insulting that his friend Anna is still refusing to even consider putting Kim on the cover of Vogue. He thinks Anna is listening to a bunch of ‘know-nothing’ corporate haters, as he put it. He’s upset that Anna isn’t willing to do him this personal favor and put Kim on the cover.”

Again, the delusion shines bright with this one. We already Kanye’s in a deep state of denial over his fiance’s fame and status in Hollywood, but this is going overboard. Also, as much as Anna appreciates Kanye’s friendship, there’s just no way she’s ever going to put Kim on the cover of Vogue. She couldn’t even stand to have Kim on the Vogue slideshow from the Met Gala, so in what universe does Kanye think she’ll allow Kim to grace the cover of her most beloved asset? Puh-lease, never happening. Kanye’s just going to have to learn with the disappointment, although that’s not something he’s very good at.