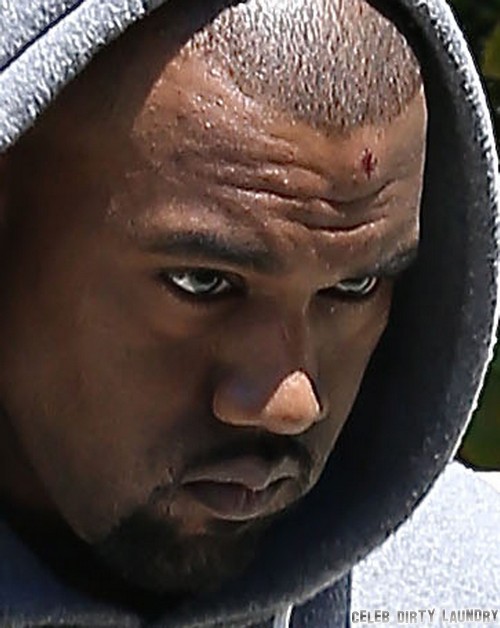 According to a new report from the National Enquirer, Kanye West stinks. Like, really really stinks. Stinks so badly that he’s making Kim Kardashian cringe. A source tells the Enquirer, “Kim adores Kanye, but one thing that turns her off big-time is bad B.O. She says Kanye’s feet smell like rotten cheese when he takes off his shoes, so she insists he washes them every night and coats them in baby powder before he can get into bed with her.”

HAH. Kim telling Kanye to coat his feet in baby powder? Right. I’d pay money to see that on live television, and then Kanye’s ranting afterwards would make for TV gold.

Wait, the story gets better. According to the report, the worst part is not Kanye’s feet, but rather his underarms. The source adds, “The biggest problem is his armpits, even though he uses deodorant. He’s even tried shaving his underarms, but that didn’t help either. Kim’s read that excessive sweating is common among overweight and out-of-shape people. She wants him to try injecting Botox in his armpits, which can cure people who can’t stop sweating.”

The Botox thing totally has merit – celebrities often take a hit of botox in their arm pits before red carpets and major events so they won’t sweat as much and smell when they’re giving interviews. But again, it’s Kanye. Would he ever be willing to bow down to Kim’s requests on this matter? We all know who wears the pants in this relationship, and it aint Kim. Besides, Kim’s not exactly one to give weight advice to other people, is she? Sure, maybe she doesn’t suffer from B.O. But that doesn’t mean that she’s perfect, and if she wants the fame, she’s going to have to learn to live with Kanye’s stink – if it even exists.