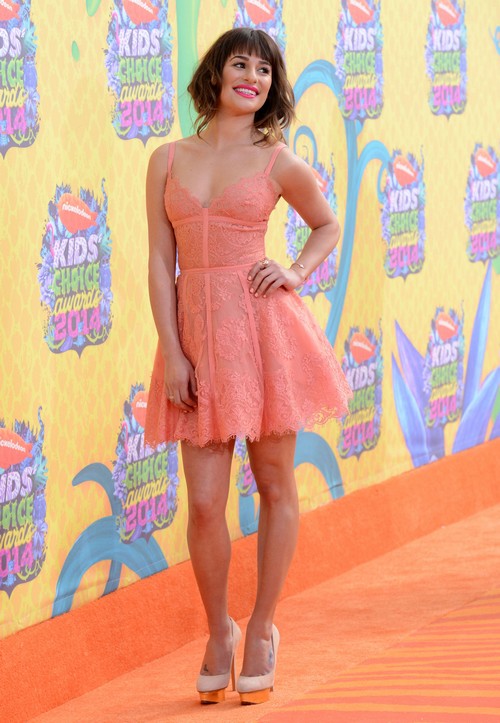 Karl Lagerfeld has to be one of the most entertainingly obnoxious people in the fashion industry. He adores his cat, he hates fat people, and  yet, every time he gives an interview, you walk away appreciating how even the most insane comment he makes comes off sounding natural. It’s the power of Karl Lagerfeld. Even if he wasn’t in control of the Chanel brand, he would have been in the spotlight somehow.

Anyway, being Karl Lagerfeld also comes with an endless list of perks, including the ability to turn down actresses on a whim. We already know that Karl has a long list of celebrities that he doesn’t like. And apparently, we can now add Lea Michele to that list.

Apparently, Karl is refusing to lend Lea any Chanel outfits for the red carpet, all because he doesn’t like her ‘look’. Lea’s very skinny so I doubt Karl has an issue with her weight, but I doubt she will be happy when she hears this.

A source tells Star Magazine, “She is going to be livid and freak out, but there’s no string that any stylist can pull. She is more than welcome to purchase the dresses, but having them lent to her isn’t an option.”

Yikes, Karl! Meangirl much? Sometimes, I feel like all the fashion designers are all tiered according to their popularity, just like high school. Because Karl Lagerfeld is at the top, despite his idiosyncrasies, he’s able to pull all these crazy stunts and refuse to let actresses wear his clothes. I get that Lea Michele isn’t super A-list or anything, but she’s pretty much the leading star of Glee, which is still a very popular network show. If Karl can let other B-list actresses wear his clothes, why can’t he let Lea? Cause she’s UGLY?

Oh, I forgot. This is all about her ‘look’. Right. Well, I think Lea’s doing just fine with all the other designer clothing she gets sent on a regular basis, so Karl can stick to dressing size negative zero models and lip-biting actresses.