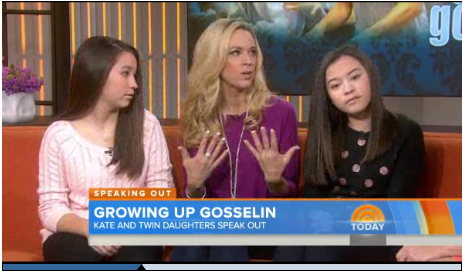 Cara Gosselin and Mady Gosselin are teenage girls, and they’re sick and tired of being Kate Gosselin‘s little propaganda puppets. At least, that’s what it seems like from all their public interviews and appearances. Although Kate might have initially thought that parading Cara and Mady around to prove her parenting skills was a smart idea, she’s probably regretting it now. They’ve only done two interviews, and they’ve already called her annoying and then implied that she’s a terrible mom. Is there a reason to them humiliating Kate, or are they just being teenagers trying to get revenge on mummy dearest?

Sources tell us that the Gosselin kids are starting to rebel, not just because they’re teenagers and that’s what teenagers do, but also because they’re sick of being used by their mother for money and attention. Apparently, Cara and Mady are even thinking of getting emancipated from their parents, and knowing what we do about Jon Gosselin and Kate Gosselin’s shitty parenting skills, they probably have a great chance of getting it done. Any court or judge would grant Cara and Mady emancipation, although they probably have to wait a couple more years to get to the right age. Of course, that’s if Kate hasn’t stolen all their money by then.

Emancipation of child stars is nothing new, with Macaulay Culkin probably the most famous example. He decided at a very young age that he was done with his exploitative parents, and then emancipated himself. Cara and Mady might be headed down the same path, and honestly, they’re probably better off without Kate and Jon constantly using them for money and fame.