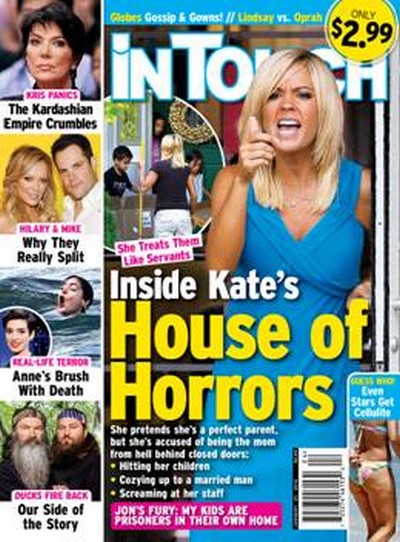 Well, In Touch Weekly has become Jon Gosselin‘s mouthpiece against his battle with Kate Gosselin. Their latest cover issue is eerily reminiscent of past cover issues, with Jon basically accusing Kate of being the ‘mother from hell’ behind closed doors.

According to Jon’s claims, Kate’s pretend world where she’s the ‘perfect parent‘ is as fake as her hair. There are accusations of Kate hitting her children, of Kate ‘cozying up to married man‘, and of Kate ‘screaming at her staff’. Jon states unequivocally that his kids are ‘prisoners’ in their own home, claiming that they don’t know the dire straits that they have been put in.

Jon tells In Touch, “They live in such an isolated house. When they’re with me, I let them out into society. I don’t close the gate and make them live in a compound like Kate does.” Jon also adds, “You can’t breathe the wrong way without upsetting her. The kids have to ask before they get a drink, before they get a snack, before they open the fridge, before they go to the bathroom. It’s ridiculous.”

Yeah, the kids have to ask before they get a snack or eat something from the fridge – what awful parenting! Seriously, what the heck are these ridiculous claims from Jon? Does he really think that controlling a child’s diet is bad parenting? Also, the gated community is to protect the children, not keep them in a jail cell. Besides, I’m sure the kids would admit that they prefer their mother’s gated community to Jon’s run-down shambles of a place.

Either way, this ridiculous vendetta by Jon is just getting more ridiculous by the minute. By this point, I don’t think anyone takes him seriously. While I think both Kate and Jon deserve each other and their bad rep, Jon’s parenting skills are significantly worse than his ex-wife’s, and he’s in no position to give ‘advice’ on how to raise his kids.