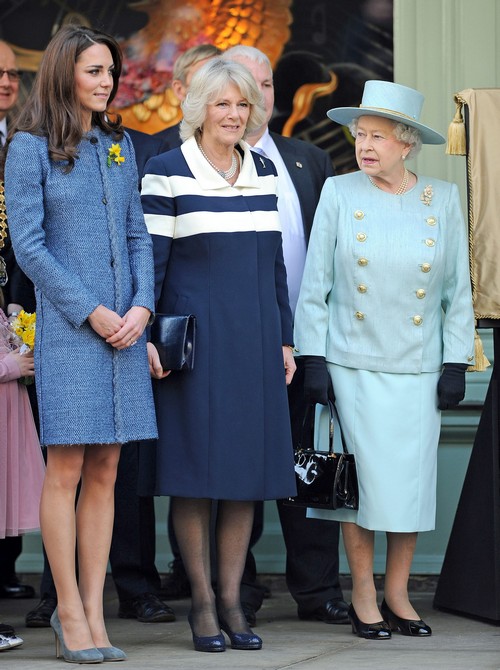 Kate Middleton is getting ready for a baby girl and child number 2, and that means that she’s unofficially preparing for the first Cambridge daughter. Prince George is going to have a field day with his new sister, isn’t he? People Magazine had an extensive new report on Kate Middleton’s preparation for her upcoming birth, including her plans to spend time with Prince George before baby girl Cambridge is born. We’ve already covered Kate’s plans to spend most of her post-birth time at Anmer Hall, raising her two children in relative privacy. We know Kate hates Kensington and she hates being under Queen Elizabeth’s nose, and this gives her a perfect excuse to run away from the rest of the royals.

Now, naming Prince George was a relatively painless task, and George was a name that was almost universally agreed upon by all parties. However, we’ve also covered the naming battles that are going on for naming baby girl Cambridge, and that includes the options of Margaret, Elizabeth, and Diana – not to mention a plethora of others.

For all intents and purposes, almost everybody wants to have their input taken into consideration when naming Prince George’s younger sister and Prince William’s and Kate Middleton’s second child. Queen Elizabeth will want Margaret, to honor her late sister. Camilla Parker-Bowles will want Camilla, because she’s a narcissist. Prince William will want Diana, to honor his mother. And Kate and her family will probably want something simple and classy, and it will undoubtedly be a name that causes controversy among the rest of the royals.

It’ll be interesting to see how the royals feel about Kate’s new methods of raising her children away from Kensington, and it’ll be even more interesting to see who actually has any input in naming Kate Middleton’s baby girl. Kate and Will are refusing to follow tradition when it comes to their children, and I have no doubt that they will continue that trend in this case as well.