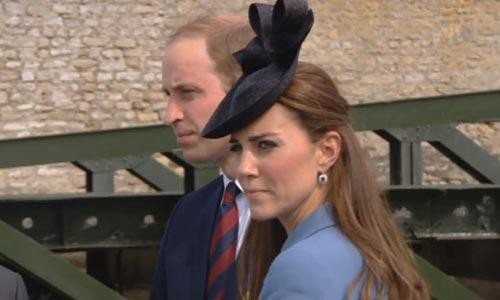 I think at this point most women have kind of concluded after her bare bum photos were made public by German Bild magazine that Kate Middleton must kind of like exposing herself to the paparazzi because it’s an easy enough thing to avoid, right? Sure, anyone can have the misfortune of wearing a dress on a windy day and being caught off guard, but it’s the kind of thing that if it happens once and mortifies you, then you make sure it can’t happen again. Spanx, boy shorts, whatever. There are lots of options to cover up beneath a little dress and the British media seems to collectively believe that Kate purposely doesn’t do it.

According to the June 16th print edition of In Touch magazine the British press has shied away from publishing the most recent bare bottom shot of the duchess, that doesn’t mean they aren’t talking about it. The majority believes that Kate purposely takes risks as a way to rebel against the queen and all of the rules that she must adhere to as a member of the royal family. She was pretty wild before Prince William proposed and that inclination never fully dies. Royal watchers and British commenters alike seem to firmly believe that no woman would accidentally have this many accidents with photographers. Kate likes for people to know that she’s not a stuffy royal and this is one small way to make that happen.

Now that Queen Elizabeth has ordered Kate to get it together do you think that she’ll really listen? Or will she temporarily do as she’s told until the pressure is off? I suspect there are more nude Kate photos coming in the future don’t you? Have we seen her assets for the last time? Tell us your thoughts in the