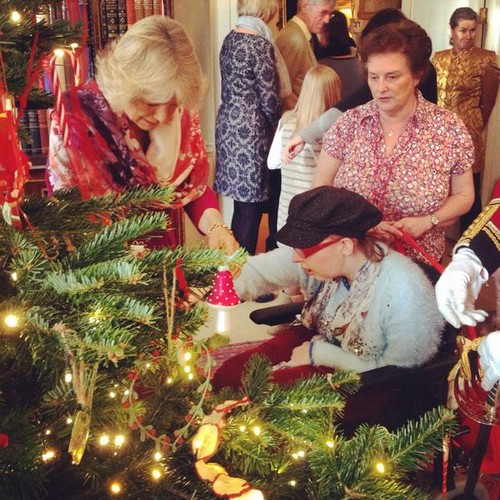 Kate Middleton and Queen Elizabeth are locked in a battle of wills over the Queen’s Christmas breakfast and Camilla Parker-Bowles is to blame. I know, it’s such a mundane thing to fight over, but to the royals, it’s their tradition and as such, befitting of the utmost importance. Right now, Kate Middleton, Prince William, Prince George, Carole Middleton, Michael Middleton, Pippa Middleton, and Kate’s entire family is staying at Anmer Hall. Sources close to the royals have already admitted that the Middleton family hope that they’re invited to Sandringham for the annual Christmas breakfast, but will the Queen break tradition and invite them?

There are already rumors that the Queen’s not planning to invite the Middletons for Christmas church, so what are the chances she’ll break protocol and invite them for breakfast? Especially since that’s usually when they have the annual Christmas photoshoot with the entire royal family. Plus, Camilla Parker-Bowles would have fought hard to keep the Middletons from being invited to the Queen’s Christmas festivities. Camilla Parker-Bowles has never been a fan of the Middletons, as she reportedly considers them low-class and fame-whorey. She’s done everything in her power to keep them from achieving any prominence, influence, or importance with the Queen, and she’s so far succeeded.

Right now, it’s all a matter of whether Queen Elizabeth feels like backing down on royal ‘tradition’ to do things a little differently. Will Camilla’s incessant manipulation and the Queen’s adherence to royal protocol win out, or will she cut the Middletons a break? It’s very possible that if she doesn’t invite them, Kate Middleton and Prince William refuse to attend Christmas breakfast – it’s unlikely, but it IS possible. Would the Queen be willing to risk that? Perhaps not.

What do you guys think? Will Queen Elizabeth decide to invite the Middletons for Christmas breakfast at Sandringham? Or will she call a spade a spade and stick with what she knows? Let us know your thoughts in the comments below.