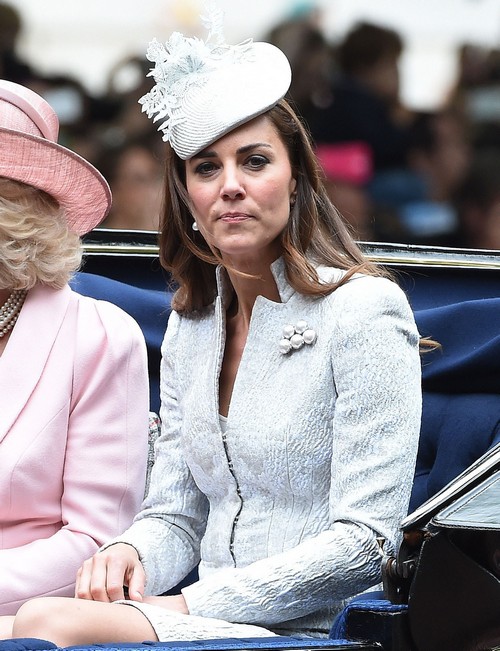 Christmas is right around the corner, and Kate Middleton and the rest of the Royal Family are gearing up for the holidays – and Queen Elizabeth is determined to have a strictly traditional celebration, without any drama or outsiders, regardless of how the impact on The Duchess of Cambridge! The Queen is hosting the holiday at her Sandringham Estate and Kate Middleton hates the strict guidelines for the big day. Queen Elizabeth reportedly has big expectations for the Royal Christmas celebration – down to the guest list, gifts, and entertainment.

According to the December 29 edition of OK! Magazine, Queen Elizabeth has banned all non-Royals from the Christmas celebration at Sandringham Estate. Not good news for Kate Middleton and her devoted family. Prince William’s in-laws, Carole and Michael Middleton, the parents of Kate Middleton – are staying at Amner Hall so they can spend the holidays with Prince George. However, they probably won’t be seeing much of baby George because he will be at the Sandringham Estate for Christmas – and Kate Middleton’s family is not on the guest list. No way Pippa Middleton with her future Today Show gig or James Middleton with his controversial ‘sexy’ cake business are getting anywhere near the Queen! The Middleton’s aren’t the only ones banned from the Royal holiday though, Sarah Ferguson is also banned (courtesy of Prince Philip), but Prince Andrew and her daughters will be attending. Hey, maybe Fergie can hand out at Amner Hall with the Middletons and wait for the party to end.

OK! Magazine teases that the guest list for Queen Elizabeth’s holiday extravaganza is just the tip of the iceberg. Apparently Queen Elizabeth has strict stipulations on presents, and no one is allowed to spend a lot of money, and the gifts are supposed to be “light-hearted.”  The Queen also expects everyone to participate in family game night, which is mandatory. And the kicker?  No one is allowed to leave until nearly midnight – when the Queen announces that she is tired and is ready to call it a night.

What do you think of Queen Elizabeth banning the Middleton’s from the Royal Christmas?  Is it fair to not let Kate Middlton be with her parents so they spend the holiday with their grandchild George?  Do you think that Queen Elizabeth is being a Christmas diva?  Let us know what you think in the comments below!