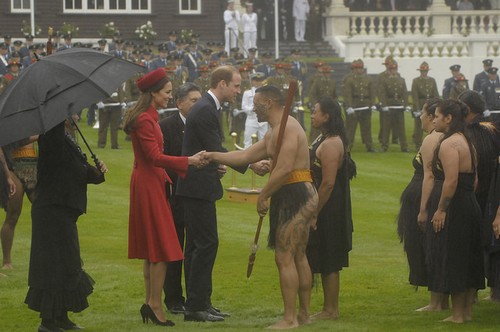 According to reports on Kate Middleton‘s outfit in New Zealand, she was ‘honoring’ Princess Diana by wearing red. Right. I’m sure honoring Diana was the first thing on Kate’s mind while embarking on a three-week long tour to two different countries involving 45 engagements.

Hollywood Life explains that Diana wore a blood-red coat by one of Diana’s favorite designers, Catherine Walker, to kick off the tour. Or the more probably reason is that Diana needed a great designer to design her outfit for opening the tour, and Walker [as an in-demand designer] happened to be available. The fact that Walker was Diana’s ‘favorite’ designer was probably not a coincidence, and while it’s not the predominant reason for choosing Walker, I’m sure it played a factor. After all, it was the opening day, and Kate knew the coat would draw attention – and with it, attention to the fact that Walker designed the outfit.

Now, keeping that in mind, we know that the royals have to think about the ramifications of every decision they make. The royals know that even by indirectly honoring Diana, whether they meant to or not, they are dissing Camilla Parker-Bowles. Camilla has now taken over Diana’s position in every possible manner, including being added to the official Church of England prayer list. Even Prince William is not on that list, which shows you that the Queen has finally accepted that Camilla will take her place in a couple of years.

That means that Kate and Will are now being superseded in authority by Prince Charles and Camilla, and while they can’t openly rebel against the Queen’s decision, they can certainly fight back with every little chance they get. So by wearing Diana’s favorite designer, Kate is telling the whole world that she still supports Will’s mother, and neither of them are fully on board with Camilla taking power.

Do you guys agree? Or did Kate really have no clue that she would be making a statement with that coat [unlikely]?