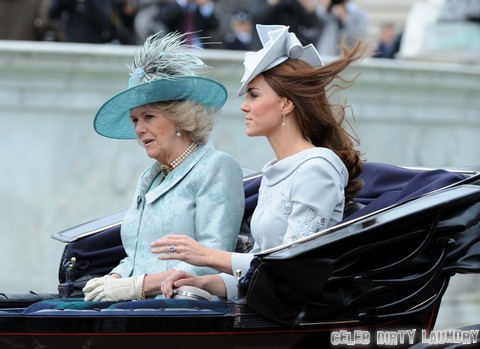 Kate Middleton has cancelled her solo Malta trip and most of her upcoming appearances due to her morning sickness, but apparently, that’s not a good enough reason for Camilla Parker-Bowles.

As we had previously reported, Camilla Parker-Bowles is not impressed with Pregnant Kate Middelton’s work ethic, and she’s secretly been calling her lazy and spoiled behind her back – all because Camilla thinks she’s malingering with exaggerated morning sickness. See, to Camilla, puking every morning, not being able to eat or keep anything down, and losing half your body weight is akin to ‘laziness’. No, she’d rather have Kate go out and attend to all her official commitment, her health be damned!

She’s never going to say all this in public – she’ll be crucified. But I think we know by now that the relationship between Camilla and the younger royals is strained, at best, and outright hatred, at worse. Prince William himself doesn’t have the best relationship with her, and she’s married to his father, Prince Charles! And Camilla also has the additional worry that the Queen will pass over Charles and give Will and Kate the throne instead, considering their popularity and their ability to actually make the populace like them – a feat that Charles has yet to accomplish.

So no, it’s hard to blame Camilla for being worried. But blaming Kate for missing her public appearances when she’s this sick? The poor thing looks wasted in recent pictures, and it’s not like she’s doing this out of her own free volition. I can maybe see Camilla’s point if this was later in the pregnancy, since the effects of Hyperemesis Gravidarum would have lessened by then. But puking your guts out every morning can’t be easy for anyone, much less someone with this much public focus on them. So basically, if the sources are telling the truth, Camilla needs to find something else to occupy her time since she apparently spends most of it bitching about Kate.